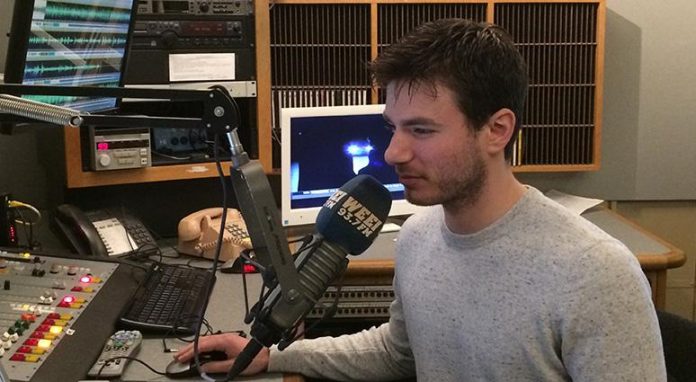 New England Patriots quarterback Tom Brady furiously left the radio interview after one of the host named Alex Reimer previously called his five year old daughter as an “annoying little pissant”. The host was very bold to make such statement but was soon suspended from WEEI station. So, who is Alex Reimer. Here are some of the interesting facts about the host.

Before working for WEEI, Alex launched his own Red Sox podcast when was a teen. He has also worked with Forbes. Prior to that, he was also a contributor to Boston Magazine and covered NFL section for SB Nation. In addition, he also worked for Boston Herald, BostInno and co-hosted Big Show Unfiltered with Boston radio legend Glenn Ordway on SiriusXM.

2.He was born on Massachusetts.

According to his Twitter profile, Alex was born on Boston, Massachusetts. He graduated from Boston University in broadcast journalism and sports broadcasting.

3.What did he said about Tom Brady daughter?

Alex called Tom Brady’s daughter Vivian Brady, 5, an “annoying little pissant” while discussing the documentary “Tom vs. Time”. For those who don’t know what pissant means, it means a person or thing of no value or consequence or a despicable person/thing.

The legendary quarterback was so upset with Reimer’s comment that he openly questioned whether he would continue with the weekly interviews on WEEI. He said: ‘I’ve tried to come on this show for many years and showed you guys a lot of respect,’I’ve always tried and come on and do a good job for you guys. It’s very disappointing when you hear [the comments about my daughter], certainly. My daughter, or any child, certainly don’t deserve that.”

5.What next for Alex Reimer

Shortly, after Reimer made those comments, he was suspended and was sent home from Minnesota by the station. Station released the statement saying:

We are disappointed and embarrassed by Alex Reimer’s on-air comments made last Thursday evening. His remarks were utterly indefensible, and mean-spirited commentary directed in any way at children is wholly inappropriate. Mr Reimer remains suspended indefinitely from all WEEI platforms,’

Neve Campbell Wiki, Bio, Age, Net Worth, and Other Facts

factsfive - March 27, 2021
Neve Campbell was born and raised in Guelph, Ontario, to Marnie (Neve), a Dutch-born psychologist and yoga instructor (from Amsterdam), and Gerry Campbell, a...

Heather Graham Wiki, Bio, Age, Net Worth, and Other Facts

Christina Aguilera Wiki, Bio, Age, Net Worth, and Other Facts

Ross Lynch Wiki, Bio, Age, Net Worth, and Other Facts

Andy Serkis Wiki, Bio, Age, Net Worth, and Other Facts