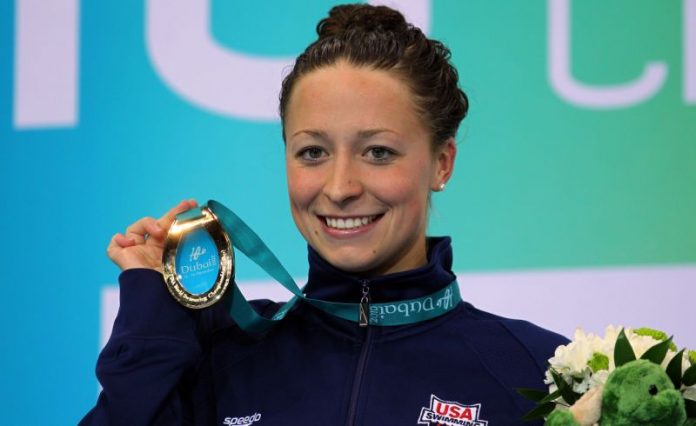 Ariana Kukors is a retired swimmer and a world record holder in 200 meter individual medley. She is one of the well respected athletes having won total seven medals in the major international competitions. As of 2018, Ariana Kukors net worth is estimated to be around $4 million. Here are some of the interesting facts about her.

1.Her family are mostly associated with swimming.

Ariana Kukors was born on June 1, 1989 in Washington to Peter and Jaapje Kukors. She started swimming at the age of five under the influence of her older sister Emily who swam for Auburn University.

Her younger sister Mattie Kukors also swam for University of Michigan from 2009 to 2011 and currently she swims for Arizona State University. Ariana swam for Washington Huskies swimming team at the University of Washington for one year. She then moved to California to train with Fullerton Aquatics Sports Team under the guidance of Sean Hutchison. She also holds bachelor’s degree in business from Chapman University.

Ariana first competed at the 2004 U.S. Olympic Team Trials as a 15 year-old but she failed to qualify. At 2006 National Championships, she qualified to swim at Pan Pacific Swimming Championships and the next year she also qualified at 2007 World Aquatics Championships by finishing in the 2nd place in the 400 meter individual medley.

2009 was a big year for her as she won one gold and one silver medal at World Aquatics Championships. She finished fifth in the 200 meter individual medley in Summer Olympics. Due to her amazing performance, she was named the American Swimmer of the year by Swimming World Magazine.

During her career, she won a total of seven medals in major International championships including two golds, three silvers and two bronze medals. On September 26, 2013, she announced her retirement. She now works as the director of health inspiration for LifeWise Health Plan of Washington.

3.She has accused Sean Hutchison of sexually abusing her when she was 16.

Statement released by her attorneys says: “I never thought I would share my story because, in so many ways, just surviving was enough, I was able to leave a horrible monster and build a life I could have never imagined for myself. But in time, I’ve realized that stories like my own are too important to go unwritten.”

However, Hutchison denies the allegation and in a statement released by his attorney he said, “At no time did I ever abuse Ariana Kukors or do anything with her that was not consensual, I absolutely deny having any sexual or romantic relationship with her before she was old enough to legally make those decisions for herself. Prior to that time, I did nothing to ‘groom’ her.”