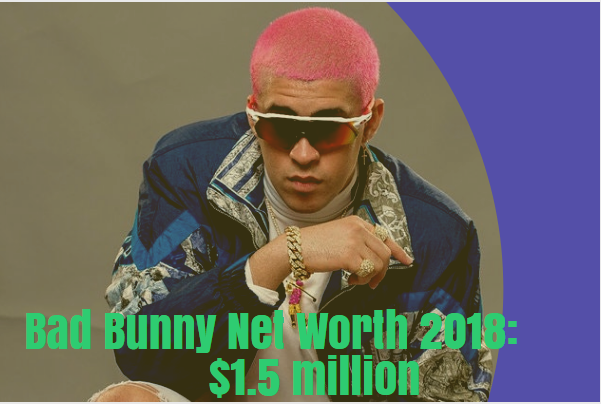 Bad Bunny is a leading artist in Spanish-language based rap music today. He has become known from the large amount of quality collaborations that he has done over the last couple of years.

Some of his best and most popular songs include “Soy Peor”, “Tu No Metes Cabra”, and “Sensualidad”. He has also appeared in a collaboration music video alongside Becky G for the single titled “Mayores”.

He has also used the YouTube platform very effectively with his YouTube channel amassing more than 1 billion views in its lifetime so far. His hard work has helped him to bring in a lot of success in his career today.

Here are some interesting facts about Bad Bunny:

As of 2018, Bad Bunny net worth is estimated to be around $1.5 million. Even though he is at the early stages of his career with a very long journey waiting ahead for him, he has already had a commercial success. The artist has had two simultaneous charting tracks on the Hot 100 list. The singer has performed in different events and that alone has helped his net worth climb tremendously this past year.

Currently, Bad Bunny is also working as a host for a Spanish Language show called Trap Kingz, which is helping him market his personal brand very well. The unique personal brand that he and his team have created today has more than 9.6 million followers on Instagram which more than justifies his popularity and why his music genre is growing at such a fast pace.

Though his stage name might be known by everybody, his real name is definitely not. His choice of Bad Bunny as a stage name is understandable as it is easy to remember and brand-able at the same time. He was born on March 10, 1994, in San Juan, Puerto Rico. He mentions how he has been passionate about music from his childhood and had his eyes on being a singer one day when he was only 5 years old.

3. He dropped out of University for his career.

The road to being a singer for him though has definitely been an easy one as the ride has been full of ups and downs. After finishing his high school, Martinez actually went to the University of Puerto Rico where he was studying audiovisual communication. But when the right opportunity came for Martinez, he made the bold decision to drop out from University and kick start his musical career.

He was initially working at a supermarket as a worker to make end’s meet whilst at the same time was working as an independent artist. As with most independents, he was very active in SoundCloud looking for his music to get the attention of people. One of his early songs called “Diles” was very impressive to an artist called DJ Luian. Eventually, he was signed to the label called Hear This Music.

4. His genre is Latin Trap.

This was the start of Bad Bunny and his professional career to follow. Today with his career receiving massive momentum, he is also associated with Cardenas Marketing Network through which he produces his music.

The young singer has only been active in the music scene for a couple of years professionally but has already developed a reputation for himself. His music focuses on Latin Trap and this year the genre has received global fame starting out because of hits of the genre like Despacito which was undoubtedly the most viral song of 2017.

5. He has made a name for himself through collaborations.

He has collaborated with big artists like Becky G, Karol G, Ozuna, and Daddy Yankee that have helped him develop a solid fan base. This has been a great strategy for Bunny who is also proving great value to the artists that he features in music videos and single for developing a Win-Win situation.

This is also a big win for the audience as they are getting to receive new and unique styles of music with the ever changing taste of audiences around the world. He has also been nominated for Best New Latin Artist in 2018’s iHeartRadio Music Awards and is hopeful of winning.

With Latin Trap reaching the worldwide mainstream arena and looking like staying there, aspiring artists like Bad Bunny have a very chance of making it to the top.

Gus Kenworthy Net Worth: 5 Facts You Should Know

factsfive - February 6, 2018
August Richard Kenworthy shortly known as Gus Kenworthy is an American freestyle-skier. Gus is one of the athletes who will be competing in the...

James Marsden Wiki, Bio, Age, Net Worth, and Other Facts

XXXTentacion Net Worth: 5 Facts About The Controversial Rapper

Paget Brewster Wiki, Bio, Age, Net Worth, and Other Facts

Gemma Arterton Wiki, Bio, Age, Net Worth, and Other Facts