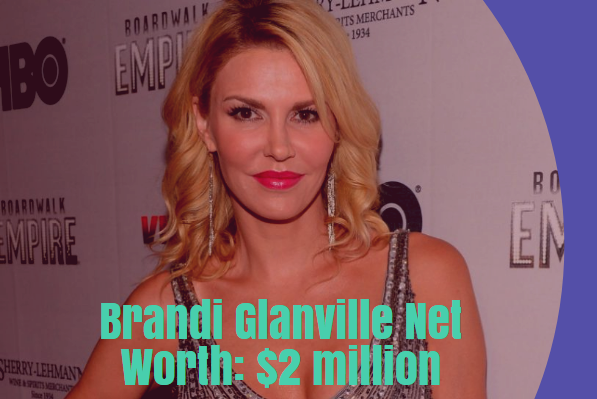 Brandi Glanville is an American television personality and former model. She has made her name by being an important cast member of the reality television series called The Real Housewives of Beverly Hills.

Most recently, she was part of the Celebrity Big Brother which has brought back her name to the mainstream after a short break on screen.

Here are some interesting facts about Brandie Glanville:

1. Brandi Glanville net worth is estimated to be $2 million

As of 2018, Brandi Glanville net worth is estimated to be $2 million. It is reported that she made upwards of $175,000 every season whilst she was part of the cast. This is also the same place where she gathered her fans as well. This number might be higher as the details of her divorce were not available for the public eye. But, it is very safe to say that she her bank account is pretty large with the success she has had as a television personality and author.

She is one that speaks out about her life with the fans and has created a strong fan following for that same reason. Today, she operates her own blog and has cultivated a large follower base on social media. She even has a podcast called Brandi Glanville Unfiltered which started back in 2013 and contributes to several magazines as a columnist including celebrity magazine ”NW”.

2. She rose to fame because of The Real Housewives of Beverly Hills

Glanville started her career in modeling when she was only 16 years old in Europe after signing with Elite Model Management. She went on to have a successful career spanning more than 17 years. Then, she made the transition into television.

Brandie was a perfect fit for being a part of the super hit reality series. Her attitude towards life and the philosophy of just being herself and speaking what she perceives to be exact have made her a star which is thoroughly loved by the fans of the show.

After her time was up on the show, she also appeared in a number of shows as a participant. Some of the ones where she has been present include Celebrity Apprentice, Famously Single, and the UK version of Celebrity Big Brother. She is also in the U.S. version of the show this year which has created a lot of buzz around her fans.

3. She is a New York Times best-selling author

Brandie has released two books namely “Drinking and Tweeting: And Other Brandie Blunder” in 2013 and the book “Drinking and Dating” in 2014. This was during a time when her relationship turned sour in her personal life which she reflected on her books.

Today, she holds the title of a New York Times best-selling author through expressing her stories in the book. It has been described as a first-hand gossip book that never gets boring.

4. She had a messy divorce with Eddie Cibrian.

Eddie Cibrian who is an American actor best known for his role as Cole Deschanel on Sunset Beach married Brandie on May 12, 2001. Together they even have two sons named Mason and Jake. Their marriage would end sour in a very public way in 2010.

The very next year after their divorce, he would go on to marry LeAnn Rimes..  Eddie and Rimes were together in the “Nora Roberts” movie which had started the affair.

Brandie initially wanted to separate from Eddie after she found out that he was having an affair with Rimes. She has elaborated upon this in her book “Drinking and Tweeting” which was one of the reasons for the vast success of the book. The details of the fall in their relationship was made very public which has definitely hurt Cibrian’s image as an actor but it is he himself who seems to be the culprit.

5. She spoke out after the #Timesup movement

Recently, she spoke up after being inspired by the #Timesup movement where she was not hesitant about how some famous people have treated her in the past.

After Gerald Butler said that she no idea who she was even after having an affair with her, Glanville showed her outrage through her blog where she said she regretted being with him and even asked him to respect women. She went on to insult Butler for what he really stands for and his behavior according to her perspective.

The irony is that Butler himself had a post in support of the #Timesup movement only a month earlier.