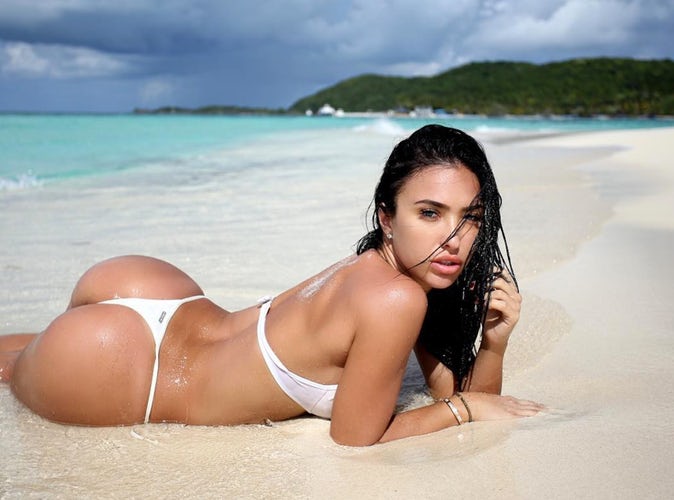 Bre Tiesi is an American model and Instagram celebrity. She is best known as the wife of NFL quarterback Johnny Manziel.

Bre Tiesi was born on May 4, 1991 in Los Angeles, California. She started her modeling career at a quiet early age. In-fact her mother was also a model and she might influenced her to enter the glamour world. When she was child, she won the Little Miss Hawaiian Tropic Contest and entered several other contests. As time went by, she concentrated on her studies.

Tiesi who first rose to stardom with resembling face to Megan Fox, started her professional modeling career at the age of 18. She worked for famous brands and magazines like Playboy, Maxim and Loaded. She has also appeared in some TV shows like MMAthletics and Lie To Me.  She has also appeared on MTV reality series “Nick Cannon Presents: Wild’ n Out”.

The 25 year old athlete is now married to Bre Tiesi. According to several sources, Johnny Manziel tied the knot with model in a private ceremony in a California courthouse.

Johnny and Bre have been dating since 2016 and they got engaged last year. In an interview with TMZ in March 2017, he told: “When you find a girl as amazing as I did that saved me from where I was in my life, you absolutely put a ring on it”.

The Texas quarterback who hasn’t been playing since 2015 has struggled with sobriety and was accused of violently assaulting his former girlfriend. In an interview with ABC last month, he revealed that he was diagnosed with bipolar disorder a year ago and has since quit drinking.

Before her romance with Johnny, Bre Tiesi was in relationship with Nick Hogan, the son of wrestler Hulk Hogan. They reportedly dated from four years from 2011 to 2015.