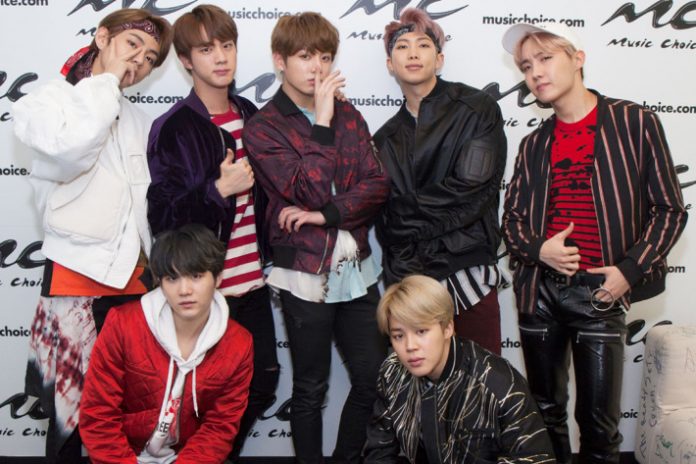 Bangtan Boys also known famously as BTS is a South Korean boy band who are breaking records with every move they make. The boy band is one of the rising stars and without releasing any English singles, they have already sold 5 million albums worldwide. After their success fans are eager to know about their net worth and sources of income. Keep reading to know more about BTS net worth

While exact net worth of the individual members of the group is hard to evaluate, websites like networthportal and squander estimates BTS net worth to be $40 million in 2018. The group has released several hit albums like 2 Cool 4 Skool and Wings and with their popularity rising day by day, we are pretty confident that their net worth currently exceeds more than $40 million. Their main sources of income are from album sales, live performances and concerts. In 2015 they also became brand ambassadors for Puma. With Puma they must have collected huge amount of money.

The group consists of 7 members and as of 2017, no one is over 25 years old. Jin is 25 years old; the oldest amongst the group, Suga is 24 years old, J-Hope is 23 years old, RM is 23 years of age, Jimin and V are both 22 years old while Jungkook is the smallest in the group with 20 years of age. Before BTS was finalized RM & Suga  was an underground rapper, Jin was a film arts student, Jimin & V were a student in Korea Arts High School and J-Hope was part of street dance group called Neuron.

Jin: He is the oldest member of the band. His real name is Kim Seok-Jin but goes by the stage name Jin. He is the vocalist.

Suga: His real nameis Min Yoon-Ki and goes by his stage name as Suga. Currently, he is the rapper in the group.

J-Hope: Born Jung Ho-Seok, J-Hope is the main dancer and rapper of the group.

RM (Rap Monster): Born Kim Nam-joon, RM is the leader and main rapper of the group. He was the very first member of the band.

Ji- Min: Ji-Min is the lead dancer and lead vocalist of the group.

V: Born Kim Tae-hyung, V is also the vocalist of the group.

Jungkook: Jeon Jung-kook is the younger member of the group with 20 years old. He is multi-talented and acts as a lead dancer, main-vocalist and rapper in the group.

After the group finalized their band members in 2012, they began marketing their own name through platforms like YouTube, Twitter, Instagram and SoundCloud by posting several cover songs. Next year they released their first album “2 Cool 4 Skool” and the lead single “No More Dream” was huge hit not only in South Korea but also in Japan. The band then continued to gain huge fame after the release of albums like Dark & Wild, The Most Beautiful Moment in Life: Part 2, The Most Beautiful Moment in Life: Young Forever. The last among the three went on to win the Album of the Year award at 2016 Melon Music Award.

The band has made history and every time they release new songs it seems like they are for something bigger and better. They have won several awards including New Artist of the Year at 2013 Melon Music Awards, Golden Disc Awards and 2014 Seoul Music Awards. Their album “The Most Beautiful Moment in Life: Young Forever” managed to win Album of the Year award at 2016 Melon Music Awards.

Their second full album “Wings” peaked at No. 26 on Billboard 200. In Korea the album became the best selling album in the Gaon Album Chart making their first million seller album. With that release they went to win Artist of the Year at 2016 Mnet Asian Music Awards. BTS was again awarded the Mnet Asian Music Award for Artist of the Year in 2017 for the second time in a row. They were also awarded Guinness World Record for most Twitter engagements for a music group. In July 2017, TIME Magazine named them one of the 25 most influential people on the Internet. They also ranked No. 5 on Forbes Korea Power Celebrity for 2017.

BTS are also active in charitable events. In 2015, they donated 7 tons of rice to charity in Apgujeong-dong.  They also participated in ALLETS’s charity campaign “Let’s Share the Heart”. In 2017, BTS donated $85000 to an organization that is connected to the families of 2014 Sewol Ferry Disaster. They also joined hands with UNICEF and created a campaign called “Love Myself”. The campaign aims to ensure that children and teens all over the world can lead safe and healthy lives without fear of violence.