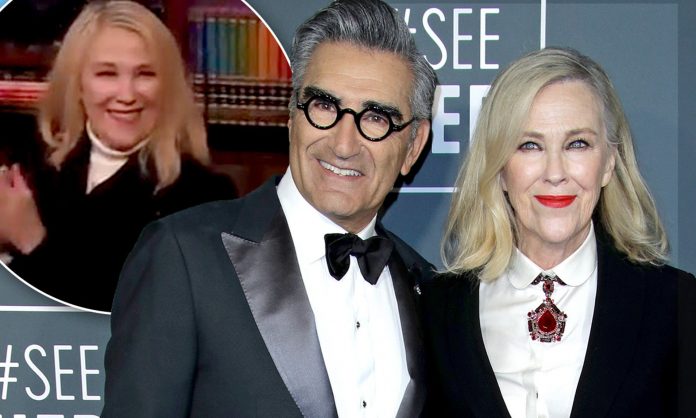 Below is a compiled list of the most interesting facts about Catherine O'Hara. Check it out!

Canadian actress, writer, and comedian, Catherine O’Hara gained recognition as one of the original cast members on the Canadian television sketch comedy show SCTV (1976). On the series, she impersonated the likes of Lucille Ball, Tammy Faye Bakker, Gilda Radner, Katharine Hepburn, and Brooke Shields. O’Hara stayed with the show for its entirety (1976-1984). She went on to devote her talents to several films directed by Tim Burton, including Beetlejuice (1988), The Nightmare Before Christmas (1993) and later, Frankenweenie (2012). O’Hara also frequently collaborated with director and writer, Christopher Guest, appearing in his mockumentary films, three of which earned her awards and nominations; Waiting for Guffman (1996), Best in Show (2000), A Mighty Wind (2003), and For Your Consideration (2006). Recently, O’Hara can be seen on the Canadian television comedy series Schitt’s Creek (2015). Her work in the series earned two Canadian Screen Awards for Best Lead Actress (2016 and 2017).

To this day, I’ve found that it doesn’t matter what a guy looks like if he’s really funny. His sense of humor makes him attractive. On the other hand, you don’t hear men saying, ‘No she’s not pretty, but is she ever funny!’

I think everyone is born with humor, but your life can beat it out of you, sadly, or you can be lucky enough to grow up in it.

If Chance the Rapper was on tour in L.A., I would try and play with him. I love him.

It’s scary when you look at how kids age, because you think, ‘Am I aging at that rate, too?’

You’ve got muscles and you use them everywhere else in your body when you want it. Why not your face?