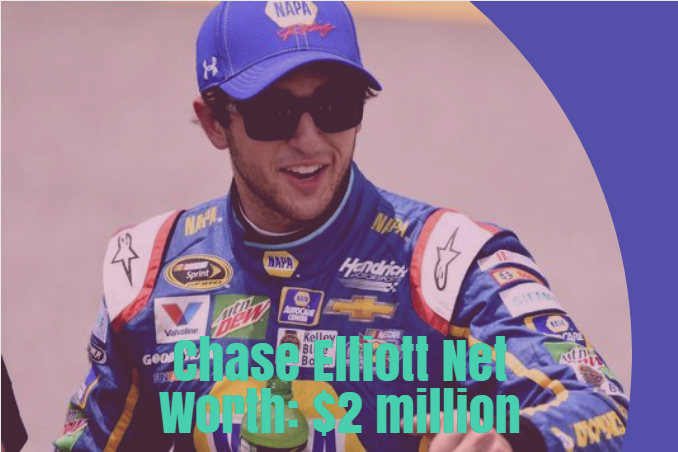 William Clyde Elliot II, who is better known as simply Chase Elliot, is an American stock car racing driver. He has been involved in popular tournaments like the Monster Energy NASCAR Cup Series as well as the Xfinity Series.

Here are some interesting facts about Chase Elliott:

1. Chase Elliot has an estimated net worth of $2 million

Elliot received his first million dollar check when he was only 18 years old. After compensating his team, he probably received at least 40% of this check which is still a very hefty check for an 18 year old.

He received this at an Awards dinner for the Nationwide Series occurring at the time which would have thoroughly surprised him as well. His success in the racing tracks has led him to being the cover of magazines including NASCAR Illustrated, NASCAR Pole Position, and Georgia Magazine.

With the rise of his popularity, he even has his own personal store in the internet where he sells premium essential racing gear for his loyal fans and keeps them up to date about his recent information of events.

Chase Elliott Net Worth compared to other car drivers:

2. He signed with Hendrick Motorsports when he was 15 years old.

By the age of 15, he had already impressed this group so much and showed so much potential that he was signed as a development driver to develop this potential.

He has recently signed a four-year contract extension with Hendrick Motorsports which means he is going to be there associated with them for at least 2022. Team Hendrick have definitely made a great decision as Elliot has proven that he is one of the top youths who Is currently killing it in the sport.

And with recent announcement that one of their main drivers Dale Earnhardt Jr. is stepping down from racing full time next season, they are already looking to replace him to Elliot.

3. He is the first rookie to win a national series championship in NASCAR.

He won the 2014 NASCAR Nationawide Series championship when he was only an 18 year old rookie. This was an impressive feat that he received which hadn’t been done before. He later went on to be named as the 2015 NASCAR Xfinity Series Most Popular Driver for the second year in a row.

But he has a lot of work in before he received such accolades. By 2010, he had already competed in more than 40 races and competed in numerous tournaments being exposed to what the world of racing is truly like.

4. He is the son of NASCAR Hall of Famer Bill Elliott

Bill Elliott is the proud Hall of Famer father of Chase Elliott. It is not surprising to see how much success that Chase has already been able to achieve even though he is still very young.

Being nurtured and mentored from a former world champion would definitely helped in Chase Junior’s growth as a top performer and leader in the world of racing which is very competitive today.

5. He voiced the character of Blaze and the Monster Machines.

Because of the popularity that he has received in real life from his talents in racing, it has helped him to make it in the reel life as well.

Some of his television appearances that surprised racing enthusiasts all around the world were in “The Dude Perfect Show” and “Ridiculousness”. He was also the voice-character for Mark Set-Go in the popular Nickolodeon show called Blaze and the Monster Machines.

He has also been a popular choice in the video games for NASCAR with one of his early features being in Forza Motorsport 6. He has also collaborated with popular figures like Jimmie Johnson and Kyle Busch to provide commentary. In his free time when he is not racing, he is still involved with racing as he served as a analyst for Fox NASCAR.

Hailee Steinfeld Wiki, Bio, Age, Net Worth, and Other Facts

Ethan Hawke Wiki, Bio, Age, Net Worth, and Other Facts

Lisa Marie Presley Net Worth: 5 Facts You Should Know

Heather Locklear Wiki, Bio, Age, Net Worth, and Other Facts

Meagan Good Wiki, Bio, Age, Net Worth, and Other Facts