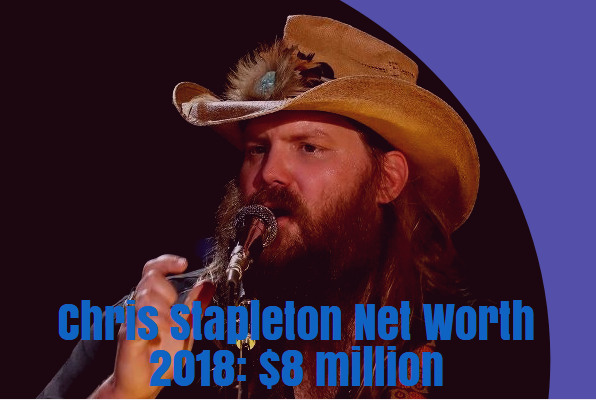 Chris Stapleton is an American singer-songwriter who has made his name in Country and Southern rock music. “Traveller”, “Parachute”, and “Either Way” have been some of his finest works in his career.

He is a man of several achievements and among some of his most prestigious awards include five Grammy Awards, five Academy of Country Music Awards, and seven Country Music Association Awards.

He has also made his name as a songwriter with credits of six number 1 country hits to his name including songs like “Love’s Gonna Make It Alright” and “Never Wanted Nothing More”.

Here are some interesting facts about Stapleton:

1.Chris Stapleton net worth is estimated to be $8 million

As of 2018, Chris Stapleton net worth is around $8 million. He has made his money after many years of hard work and dedication and is reaping the rewards of it today. He has sold millions of records so far in his career and has made a lot of his money through the performances that he has done. He also gets royalties for the songs that he writes that have done so well over the years.

He is all set to start off the All-American Road Show Tour of 2018. There are a lot of high expectations for the Tour and with the earliest dates already being sold-out it looks as if his net worth is only going to go upwards in the coming years as well.

2.Stapleton dropped out of engineering

He was born Christopher Alvin Stapleton on April 15, 1978, in Kentucky. He grew up in Staffordsville and studied at Johnson Central High School. While graduating, he was even named as the class valedictorian.

Stapleton was very smart and had decided to attend Vanderbilt University where he pursue a degree in engineering. But within his heart, he wanted a different career path and thus decided to drop out from University after a year of engineering.  This might have been the best decision of his life as today he has a very successful career.

3.He was the front man of The Steel-driver for 3 years

His career in music started off in Nashville where he was also associated with Sea Gayle Music. In 2007, The Steeldrivers was established as a bluegrass group. His time with the group was very successful as they managed to have two charting records.

This was a great opportunity for him to establish his name among the people as well. Eventually with other interests and opportunities in his eyes, Stapleton decided to leave the group in 2010.

After his time at The Steeldrivers, he founded a new band called The Jompson Brothers that same year. The group consisted of 4 members and was pretty successful.

But in 2013, Stapleton decided to sign to Mercury Nashville as a solo artist. Even though in the initial phase, Stapleton found some adjustments needed for a new career direction eventually he was able to fully use his abilities to the full.

His debut solo album titled “Traveller” was released in 2015 and made a solid impression about his beginning a solo artist. The album was a very big success and cemented his name among the mainstream artists. It had sold more than 2 million copies and had won numerous awards including the Academy of Country Music Award for Album of the Year.

5.He is the 1st artist to hold Top three spots on Top Country Albums since 1992.

In 2018, Stapleton accomplished a very unique feat that was last achieved by Grth Brooks back in 1992. In this year’s Billboard’s Top Country Albums chart, he has won all 3 of the top ranks that is possible to win.

He won Best Country Song for Broken Halos, Best country solo performance for Either Way, and Album of the year for From a Room: Volume 1. This has been accomplished after 25 years, a feat that Stapleton should be very proud of.