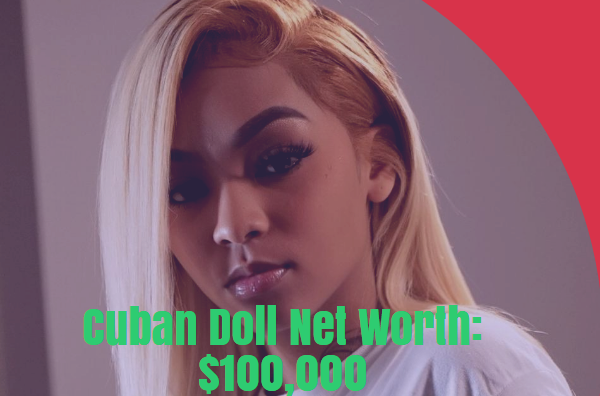 Cuban Doll is an emerging rapper who is originally from Dallas. She has been involved in the world of rap for only one year but has already brought profound results by having a large fan following.

Here are some interesting facts about Cuban Doll:

Cuban Doll net worth is around $100,000. Today, she has a massive fan following that has amassed to over 900,000 in her Instagram profile. She is a big attraction to the younger generation because of her flaunting her tattoos and amazing lifestyle. This has helped her win sponsorship with companies and helped her to promote her own music as well.

In addition to this, she has a complete store in her official website where she sells merchandise of all sorts that include clothing, caps, bags, and phone cases. She is a very brandable person which makes her a big sensation for advertising. On her social media platforms, she has become known by many as Cuban the Savage as well and never misses attention as she is half-naked in most photos. This has sparked controversy among some users but she loves being herself and looks to be great following this philosophy.

2. Her mother went to jail when she was only 15 years old.

Cuban Doll was born on August 15, 1995. Her childhood wasn’t as smooth as some lucky kids as her mother was sent to jail when she was only at the tender age of 15. This was a very difficult time in her life and had to move in with her friend.

She even mentions how there was almost zero communication among them. But, Doll has said that the experience helped to make her stronger and more responsible at such a young age. It is because of the dedication that she had during those tough times that she has been able to make a name for herself today.

Before she was involved in hip-hop, she was working very hard to become a model. This is one of the reasons why she had a large following even when she had not yet started rapping.

She has confessed that modeling did not work out for her at all and instead of hanging on to something that didn’t seem to have potential for her and the fact that paying the bills became hard, she witch to become a full-time rapper.

4. She considers Chief Keef to be her biggest inspiration.

Chief Keef was one of her favorite rappers growing up. The American rapper and record producer has had a big impact upon the young Doll’s career as her mixtape Aaliyah Keef has been a dedication to him and Aaliyah, another successful artist.

One of the most impactful works of Doll was “Finally Rich” which she cites as one of her favorite songs. She has also looked up to other artist like Missy Elliott, Lil Kim, Trina, and Nicki Minaj.

5. Cuban Link was her breakthrough tape.

Doll has mentioned that she always around rap but never rapper herself. She would be in studios but was too shy to ever try it out herself. But last year was the year that she finally made the decision that she would pursue it and she hasn’t looked back since then.

She is currently signed with Capitol Records and has specified her goal to be a successful rapper and get into radio play to commercialize content. Instead of being compared with others, she want to be recognized for her own unique style and type of music.

She worked on several other tracks before but her debut tape called Cuban Link would be her breakout sensation. The huge success of this project has propelled her to start working on Cuban Link 2 which she mentions has even more potential than her previous one. Cuban Doll was recently included in the 18 Artists to Watch list in 2018 by Complex and it is going to be interesting to see what she produces next.

Ridley Scott Wiki, Bio, Age, Net Worth, and Other Facts

factsfive - December 21, 2020
Described by film producer Michael Deeley as "the very best eye in the business", director Ridley Scott was born on November 30, 1937 in...

Omri Katz Wiki, Bio, Age, Net Worth, and Other Facts

Metta World Peace Net Worth: 5 Facts You Should Know

Tess Sanchez Wiki, Bio, Age, Net Worth, and Other Facts

Chico Bean Net Worth & Wiki: 5 Facts You Should Know