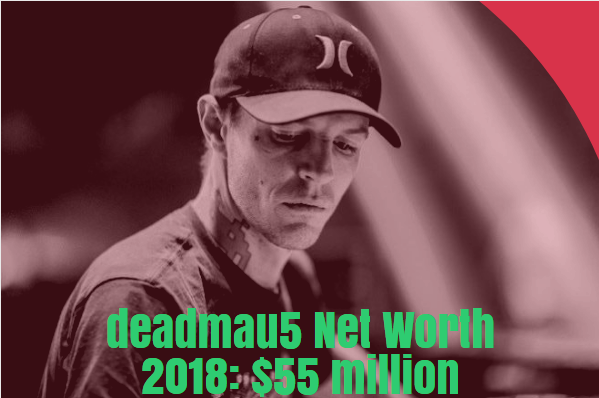 Deadmau5 is a Canadian musician, DJ, composer and record producer. His real name is Joel Thomas  Zimmerman but professionally known as Deadmau5. He is also progressive house music producer and performer who assemble the variety of styles and other forms of electronic music. He is from Toronto, Ontario, who wears giant mouse ears on stage to entertain the world.

Debut Studio album of deadmau5 was Get Scraped which was released in 2005. He has also received six Grammy Award nominations for his work. Kaskade, MC Flipside, Rob Swire are some DJs and producers with whom he had worked. At present context, Deadmau5 is one of the highest paid electronic music producers in the world.

Here are some facts about Deadmau5 :

1. Deadmau5 net worth estimated to be $55 million.

As of 2018, Deadmau5 net worth is around $55 million. He is one of the versatile musicians. He is not just musician, he is the composer, DJ, and music producer as well. His this nature had him valuable and earned the money.

At present context, Deadmau5 is one of the highest paid electronic music producers in the world.

Various music company approaches him for composing and electronic music in high wages. His popularity and passion for music had made him pay highest in the world.

2. He held a contest for his unique mouse head.

Deadmau5 once held the contest for his fans to design his mouse head. His fans were excited about the contest and many graphic designers and an artist send their ideas in 2011. “Cheesehead”, yellow mask with holes and impressive design which look like Swiss Cheese along with a white mouth and eyes that lit up was the winner of the contest.

Deadmau5 is also a You Tuber. He runs a series named “Coffee Run” on his Youtube Channel. As series is named Coffee Run he picks up coffee from Tim Horton’s and interviews various celebrities.

He has interviewed many artists till now and among them, we can count Pharell, Zedd, Russell Peters, Tommy Lee and many more.

Fan following is the inspiration for any of the celebrities’. For Deadmau5 also the fan is important for him and loves his fans. The residents of New City Gas, Montreal complained about the price of tickets for his show and in response deadman5 politely said he was not aware of the price of the tickets.

After few hours, it was announced that the ticket prices would be halves and an extra show added in his tour. This shows the importance of his fans for him. This increased more respect for him in his fan’s heart.

Quite a while back, Zimmerman found a dead mouse inside his computer while changing the video card. When he began being alluded to as the “dead mouse Guy,” rather than evading the tag, he grasped the moniker and included a 5 rather than the last two alphabets to make it crisper.Today the entire world knows him by his stage name Deadmau5.

Morgan Freeman Wiki, Bio, Age, Net Worth, and Other Facts

factsfive - October 29, 2020
With an authoritative voice and calm demeanor, this ever popular American actor has grown into one of the most respected figures in modern US...

Logan Paul Wiki, Bio, Age, Net Worth, and Other Facts

Sofia Vassilieva Wiki, Bio, Age, Net Worth, and Other Facts

Iggy Azalea Wiki, Bio, Age, Net Worth, and Other Facts