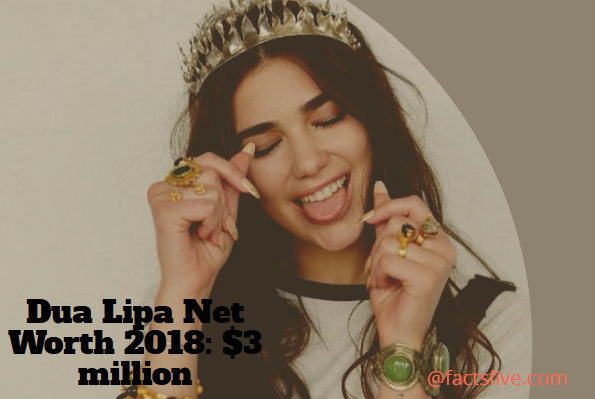 Dua Lipa is an English singer, songwriter, and model. She was the UK’s most-streamed female artist of 2017. She is dominating the music scene after releasing her debut self-titled album back in June.

In late 2016, The Fader announced its plans for developing a documentary about the young singer named See in Blue.

Here are some interesting facts about Dua Lipa:

1.Dua Lipa net worth is estimated to be $3 million.

Her net worth is of no surprise with such numbers. Her record sales and the amount of touring she does around the world are the reasons of her large bank account. She is also a top model and has done many lucrative shoots the top brands both English as well as International.

This number might soon rise even further as with the success of her album, she is planning for an International tour. She has also collaborated with well known names such as Bruno Mars and Coldplay during their respective tours this year to great applause.

2.Her real name is Dua Lipa

Even though this perception might have been created that Dua Lipa was her stage name as it sounds like a perfectly made up name for developing a personal branding image.

Lipa was born on August 22, 1995, in London. Her father’s name is Dukagjin Lipa and her name definitely rose in reflection to his name. Her family is actually from an Albanian background and her name when converted to Albanian language, actually means “Love”.

3.She began posting covers on YouTube when she was 14

During her early teenage years, Lipa would post videos of her singing the cover for the songs of artists like Pink and Nelly Furtado. That was a good way to learn about what works for an audience.

She was also a student at Sylvia Young Theatre School. Her early passion for singing also came from the fact that her father was also a singer whom she would listen to frequently. When she was 15, she moved to London in order to have better chances for a musical career and even working as a model and doing odd-jobs.

4.Her big breakthrough hit was “Be The One”

Looking at the potential that Lipa possessed, she was signed by Warner Music Group. After signing, she went on to release her first single titled “New Love”.

But after this, she released “Be the One”. This song was a big and viral hit.The song did especially well in Europe, charting within the top 10 in over 11 European territories. This was an important moment for Lipa as it opened many doors for her to take her career to the next level.

The next year in 2016, she would go on to do a successful tour across Europe.She went to release more hits like “Last Dance” and “Hotter Than Hell” to critical acclaim.

After much promotional work, she finally released the much anticipated self-titled debut album. By this time, she had already swayed fans with her unique musical style which she sometimes refers to as “dark pop”.

Blow Your Mind was an instant catch to her fans and is eventually even made it to the Billboard Hot 100 list. But “New Rules” would truly break all the rules as it became number one in the UK.  Her achievement for being the first female artist to top the UK charts since Adele came with big praises.

Along with Ed Sheeran, she is leading the way in the Brit Awards 2018 nominations in 5 different categories including British Album of the Year and British Single of the Year(New Rules).

Her popularity is at an all-time high with her recent announcement of a soon to be released second album. The artist today has more than 7 million Instagram followers and has become an inspiration to many young woman throughout the world through music.