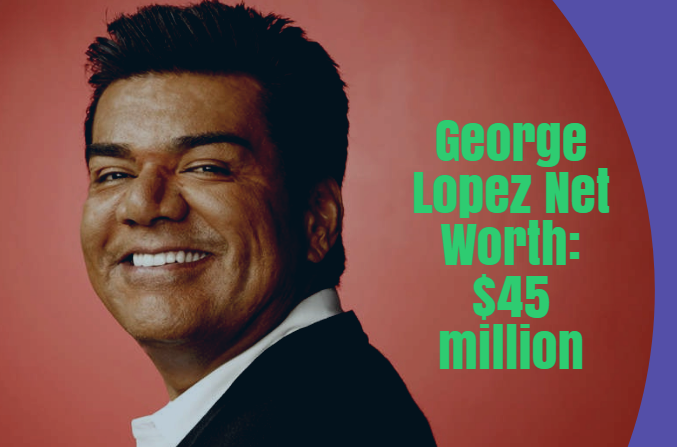 George Lopez is an American Comedian. Lopez has had a fantastic career where he has used his prime asset, comedy in television, film, standup comedy, and late-night television.

His multi directional career has seen success in all of these directions and is still carrying on with his magic on the art of comedy today. Here are some interesting facts about George Lopez:

1. George Lopez net worth is estimated to be $45 million.

As of 2018, George Lopez net worth is estimated to be massive $45 million. George is one of the most successful comedians commercially. He signed a lucrative deal for his own show called “George Lopez Show”. He held the titles for co-creator, writer, producer, and main star of the show.

This immensely popular show ran for 6 seasons during which Lopez signed a lucrative deal worth around $12 million annually including incentives as well for his work. The show was one of the top rated shows in 2007. He even got royalties after the show was sold into syndication which reportedly made him more than $20 million.

2. Lopez was raised by his grandparents.

Lopez was born on April 23, 1961, in Mission Hills, Los Angeles, California. His parents are from Mexican descent. Sadly, his father had left the family when he was only an infant age two months.

Later when he was still a kid, his mother left him at the age of 10 years. Lopez had to face such difficulties in his childhood and was eventually raised after that by his maternal grandparents. His grandmother worked as a factory worker whilst his grandfather worked as a construction worker.

With the support and love from his grandparents, Lopez was able to graduate from San Fernando High School. He is very thankful for what his grandparents did for him and they are his biggest role models.

3. Lopez is known for his “The Comedy Get Down” tour.

Till today, Lopez has toured around the country making crowd’s  laugh out loud with his skills as a comedian. It is estimated that Lopez makes at least $9 million every year through such live performances which are mostly sold out and sometimes cause controversy for his political views and satires.

He has spent creating his own personal brand. People all around the country remember a name called George Lopez whenever comedy is mentioned. This is one of the reasons why his schedule for live performances, The Comedy Get Down tour is already fully scheduled for the entire year ahead.

He is also a writer and in 2013, Lopez released a memoir where he talks about aging titled “I’m Not Gonna Lie and Other Lies You Tell When You Turn 50”.He is also starring in his self produced comedy series called “Lopez on TV Land”. Some of his works for film include Real Woman Have Curves, Bread and Roses, Naughty or Nice, and The Spy Next Door.

He is one of the most loved in his Latino community and has even featured in Time magazine’s list of Top 25 Hispanics in America. He has even co-hosted the Latin Grammy Awards twice and the Emmy Awards once.

Harris Poll has even named him as one of the Top Ten Favorite Television Personalities. But one of his biggest achievements has been the star that he received on the Hollywood Walk of Fame. This is an honor that very few talented celebrities have been able to get.

5. George Lopez net worth halved after his divorce in 2011.

George Lopez and Ann Serrano announced their marriage in 1993. Together they have a daughter named Mayan Lopez. But their relationship started to tear apart around 2010 and eventually finalized their divorce on July 1, 2011.

He mentioned in an interview after his divorce talking about his failed marriage and the impact that it had on his finances. He even mentioned how he was once worth more than $50 million but lost half of that amount because of the divorce. Today, Lopez has been able to regain a significant amount with the dedication he has put in for shows and live performances around the world.