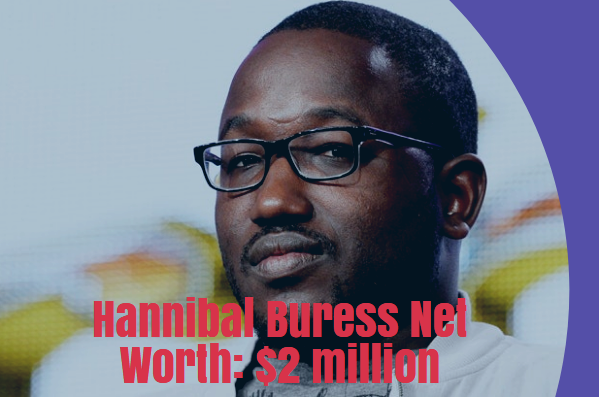 Hannibal Buress is an American stand-up comedian, actor, and television writer. He has made his name as a comedian by featuring in shows like “The Awkward Comedy Show” and Comedy Central’s Broad City.

Today, he is considered one of the top stand-up comedians in American doing comedy shows for his fans all around the country with his sold-out performances.

Here are some interesting facts about Hannibal Buress:

1. He has an estimated net worth of $2 million

Buress has released two comedy albums in his career. Because of the success of these albums and the fans that he has been able to win over through his performances, he has been involved in many tours over the years.

Now more than ever, Hannibal is busy performing all across the country in different theaters for sold-out audiences. This has been the source of the majority of his income. He has also been associated for a long time with Comedy Central and has now started working on producing his own shows.

Hannibal was born on February 4, 1983, in Chicago, Illinois. Whilst he was studying at Southern Illinois University Carbondale, he started to get exposure to stand-up comedy.

In 2002, he started to perform in different open mic events. Soon, he was picked up for shot cameo appearances in different events. One of these were in The Awkward Comedy Show. His personality was instantly attracting fans and since it was such a large platform, the name Hannibal Buress has stuck since then.

3. He released his first comedy album My Name is Hannibal in 2010

2010 was a big year for Hannibal. That same year he released his first stand-up comedy album My Name is Hannibal. He was also in Variety magazine’s “Ten Comics to Watch in 2010” list.

He was involved in many projects during this time, including being one of the writers for Saturday Night Live. He would go on to release his second album called Animal Furnace in 2012. Since then, he has been able to establish his name in the comic scene across the U.S. He has appeared in almost all of the Late night show promoting his projects and hosting a variety of fun-filled events.

During 2014, Buress used a Bill Cosby routine for many performances. One of them was picked up during his performance in at the Philadelphia club The Trocadero.

After being posted on high traffic site Philadelphia magazine’s website, this clip went viral. During the performance, the audience loved his performance and the routine he was performing. At the end of the show, he reportedly even asked the audience to “google Bill Cosby” after they reach home.

These gestures were from Cosby’s allegations of public sex abuse which he had faced numerous times throughout the last decade. This was quickly caught by the mainstream media who ran many stories regarding this incident.

Buress seems all right with all the threats that he gets from Cosby fans. He mentioned later in one of his interviews that he did not regret saying his strong words of humor and even backed it up with another skit at the 2015 Mark twain Prize for American Humor where he impersonated Cosby threatening him.

5. Buress was once arrested because he kept asking a cop to call him an Uber

One of the arrests that the comedian was involved in might spark a bit of humor to many of his beloved fans. In late 2017, he was apparently arrested for disorderly intoxication in Miami by cops.

Buress was drunk and was continuesly asking the police to call him an Uber. When the police said no, he went to a bar for the uber. The police felt that he was very drunk and even blamed him for trespassing.

Buress eventually landed in the cop’s car. This incident was pretty weird and a bit humorous in all honesty. Later, sober Buress went on to clarify the event that took place, backing himself by saying that he just wanted to go home and had no other intentions at all.