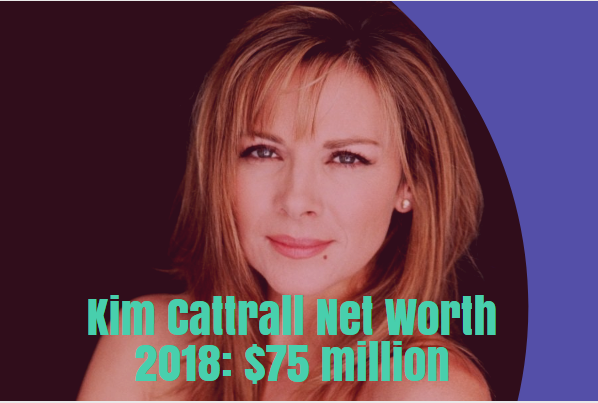 Kim Cattrall is an English-Canadian actress. She became a household name across the U.S. after getting the role of Samantha Jones, a kinky personality on the show Sex and the City.

The Golden Globe award winning actress has also gone on to star in two Sex and the City films over the years as well. Here are some interesting facts about Kim Cattrall:

1.Kim Cattrall net worth is estimated to be $75 million

As of 2018, Kim Cattrall net worth is estimated to be $75 million. She has made the majority of her large fortune thanks to her role s Samantha, a highly sexual woman in the HBO series Sex and the City. She developed a large fan following as many of the viewers of the show loved her character which was one of an open minded woman who was aroused by brief affairs and willing to experiment with new things.

Kim Cattrall Net Worth compared to her fellow sex and the city partners:

2.She loves football and follows Liverpool

Cattrall was born on 21 August, 1956, in Liverpool, England. Liverpool being her hometown, she has showcased many times her love for the Liverpool football team on the different interviews she has been part of.

Even though she was born in England, her family emigrated to Canada when she was only 3 months old. While growing up, she did go to England as well where she was a student at the London Academy of Music and dramatic Art. After finishing her high school, she attended the American Academy of Dramatic Arts in New York City.

After graduating from her acting classes, she started her career in the film titled Rosebud directed by Otto Preminger. In her early stages, she made short appearances in “Quincy, M.E.”, “Starsky & Hutch”, and “Columbo”. She then played in the television shows The Bastard and The Rebels. Soon her skills and her personality as an actress would lead to roles in popular hit films like “Tribute” and “Ticket To Heaven”.

Some of her successful film roles in her famed career have been in “Mannequin” and “Star Trek 6: The Undiscovered Country” where she played the role of Lietenant Valeris. During those initial years of her career, she was also active in theatres and made performances as a stage actress in “Three Sisters” and “Wild Honey”.

Darren Star decided to cast Kim Cattrall following her previous work and thought that she would be a perfect role for the character of Samantha Jones. Today fans all around the world recognize her face with this specific name.

Her scenes in the series would become an instant hit and she soon landed high value contracts from top brands following her rise in popularity. This was a golden period of her career and she utilized it to the optimum level as well. The series would eventually end in 2004 with the series being a big hit yet differences occurring among the co-stars.

But she did appear in its two sequels as a film in its two parts in 2008 and 2010. Even though there were rumors of a possible third installment, Cattrall has denied interest in playing any part for it. Today, she has got worldwide recognition and has also received a star on Canada’s Walk of Fame.

3.She has been married three times

Her first marriage was with Larry Davis back in 1977 but it ended sourly only after two years. 3 years later, she decided to tie the knots with Andre J. Lyson. During her stay in Germany, she had gotten to know Lyson and even used to live together there. Their marriage would end in divorce just after 5 years in 1989.

Later whilst her fame was rising through her performances on the screen, she married Mark Levinson in 1998. Levinson was popularly known as a jazz bassist. They had a lot of common and had even co-authored sensual book in 2002 titled “Satisfaction: The Art of the Female Orgasm”. But this cooperation would not help to save their marriage as they eventually decided to part ways in 2004.

Cattrall has been rumored to have been in many other relationships since then including names like Daniel Benzali, Gerald Casale, and Alexander Siddig but as of today the Sex and the City star is known to be single.

Kelly Preston Wiki, Bio, Age, Net Worth, and Other Facts

factsfive - October 26, 2020
Kelly Preston was born on October 13, 1962 in Honolulu, Hawaii. A talented and captivating performer, she first garnered international attention with her role...

Lily Collins Wiki, Bio, Age, Net Worth, and Other Facts

Jason Momoa Wiki, Bio, Age, Net Worth, and Other Facts

Gerard Butler Wiki, Bio, Age, Net Worth, and Other Facts

Sofia Hublitz Wiki, Bio, Age, Net Worth, and Other Facts

Renee Morrison Wiki, Bio, Age, Net Worth, and Other Facts

Uma Thurman Wiki, Bio, Age, Net Worth, and Other Facts