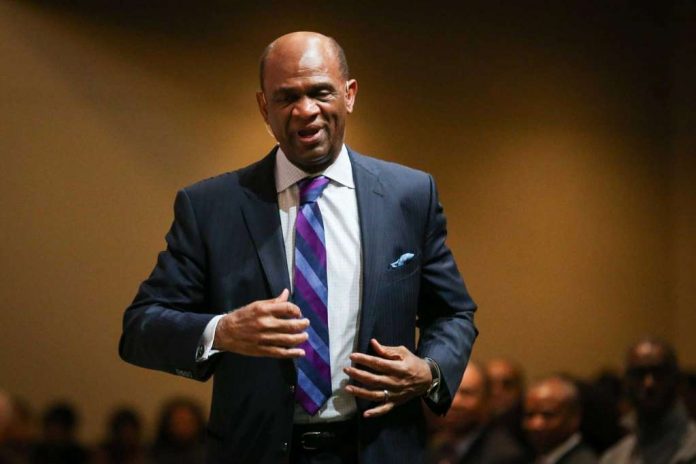 Kirbyjon H. Caldwell is an American pastor of Windsor Village United Methodist Church. He was also one of the President George W. Bush’s spiritual advisors. Recently, Caldwell is under federal indictment for wire fraud and money laundering after defrauding $3.4 million from investors. As of 2018, Kirbyjon Caldwell net worth is estimated to be around $10 million.

Caldwell was born on 1953 in Houston. His father was a tailor who made suits for famous celebrities like James Brown and The Temptations while his mother was a High School guidance. He went to Kashmere High School and then earned B.A. in economics in 1975 from Carleton College. After that, he received M.B.A. degree in 1977 from Wharton School of Business. In 1981, he received masters degree in divinity from South Methodist University.

Caldwell started his career as an investment banker and bond broker. He then led the Windsor Village Church since 1982 when it had just 25 parishioners. He also launched the projects in the Houston area including schools, an AIDS outreach center and a nutrition program.

Kirbyjon is a good friend with President George W. Bush. After September 11 attack in 2011, Bush invited Caldwell to speak at the memorial at the Washington National Cathedral. In 2008 Democratic Primary, Caldwell endorsed Barack Obama supporting him against John McCain.

Recently, Caldwell and other men are accused of defrauding investor of millions of dollars in exchange for Chinese bonds that had no value. According to documents, Caldwell duped at least 29 people into buying bonds for a total $3.4 million between April 2013 and August 2014. Caldwell now face up to 20 years in prison on the wire fraud counts and 10 years for the money laundering counts as well as $1 million fine.

Regarding his personal life, he is married twice. His first wife was Patrice Johnson, chief of staff for Texas Congressman Mickey Leland. She died in 1989 plane crash in Ethiopia. He then married Suzette Turner. Together they have three children named Turner, Nia and Alexander.

Cole Hauser Wiki, Bio, Age, Net Worth, and Other Facts

factsfive - November 16, 2020
Cole Hauser was born in Santa Barbara, California. He is the son of Cass Warner, who founded a film production company (Warner Sisters), and...

Ginnifer Goodwin Wiki, Bio, Age, Net Worth, and Other Facts

Gal Gadot Wiki, Bio, Age, Net Worth, and Other Facts

Isla Fisher Wiki, Bio, Age, Net Worth, and Other Facts

Guy Ritchie Wiki, Bio, Age, Net Worth, and Other Facts

Thomasin McKenzie Wiki, Bio, Age, Net Worth, and Other Facts