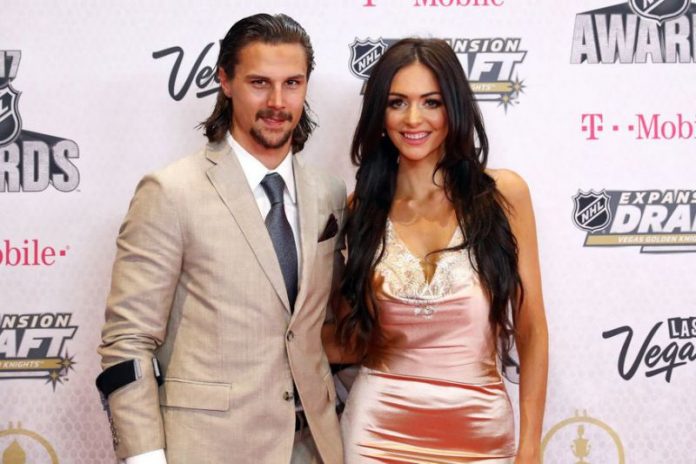 Melinda Karlsson is the lovely wife of NHL star Erik Karlsson. Hockey fans all over the world are sending sympathies for Melinda and Erick for their unborn baby’s death. The couple announced the news of their pregnancy in November 2017 but their baby died a month before his due date.

Melinda Currey or Karlsson is a marketing professional, public speaker and entrepreneur. She attended Hillcrest High School and then graduated from Carleton University where she received communications degree. After that she worked as the chief marketing officer at Wellington Creative. Melinda also studied French for two years and in 2010 she completed her courses in French as second language at Algonquin College.

Melinda worked at LaBatt Breweries of Ontario in 20016 and then became cart manager and marketing specialist at Pineview Municipal Gold Course.

Melinda is the second wife of Erik Karlsson. He was previously married to Therese Karlsson on 2012. However after one year they separated.

In November of 2016, Erik proposed to Melinda after nine months of dating. On august 7, 2017 they tied the knot at the Westin hotel in downtown Ottawa.

The couple announced in November that they were expecting their first child together. After one month, they revealed they were having a son. After fans noticed Erik’s absence at March 20 game against Florida Panthers, the team made its announcement. Erik and Melinda later shared a statement saying:

“At this extremely difficult time it’s hard to see the light at the end of the tunnel but we know one day we’ll get there. We would like to thank everyone for the love and support we have received and also for respecting our privacy and the process that we need to go through.”

“We feel very lucky to be Axel’s parents. Even though he was stillborn, we know we will hold him again one day under different circumstances and the joy he gave us will be with us forever,”

After the devastating news, his team shared a statement on its website saying: ” “The collective thoughts and prayers of the Ottawa Senators organization, the city of Ottawa and entire hockey community rest with Erik and Melinda Karlsson following the loss of their son”.