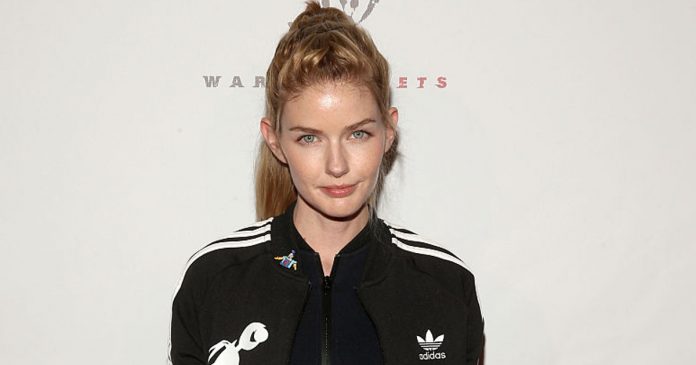 Melissa Stetten is an American former model who claimed she had flirty relationship with Donald Trump Jr. on Twitter.

Melissa posted a screenshot of message Don Jr. sent her back in 2011, claiming that they had flirty exchange just a month after Vanessa Trump gave birth to his child Tristan.

According to her profile, she is a retired model who plays for a basketball team called the Pistol Shrimps along with other models, writers and actress. She also owns the owner of Patti Lapel, a company that makes novelty enamel pins.

She tweeted on Thursday saying: “Surprised his marriage didn’t work out since he was sending me DMs a month after his wife gave birth. (I tweeted a joke about pulling a muscle changing a tampon and he replied asking if I smelled bacon? Cool joke),”

Surprised his marriage didn’t work out since he was sending me DMs a month after his wife gave birth. (I tweeted a joke about pulling a muscle changing a tampon and he replied asking if I smelled bacon? Cool joke) pic.twitter.com/JbuwC1wghf

Back in 2011, Stetten tweeted a joke about pulling a muscle while removing a tampon and Trump Jr. direct messaged her asking if she smelled bacon. She told People that she had no idea what he meant by the bacon reference.

She also told People, that she didn’t know Trump Jr. personally. She said: “He just started following me so I followed back. He would favorite my tweets and occasionally reply, I always thought of the Trumps as idiots so it was entertaining to see his failed attempts at hitting on me.”

Stetten said she deleted all of her tweets 7 years ago but Trump Jr.’s tweets are still up. In 2011, he asks twitter if “anyone else has a bacon fetish”. In reply stetten rold she would “soak my body in bacon today”. Trump Jr. then replied“Stop that!!! I am a happily married man,”

Does anyone else have a Bacon fetish??? It sounds so wrong but tastes so right!

I deleted my tweets a while ago in this exchange but just found this one pic.twitter.com/VXJ6lL9Ena

factsfive - February 20, 2018
Victoria Waldrip is an Instagram superstar who is creating attention for her through her videos on the platform. These videos include rap videos, wearing...

Lil Skies Net Worth: 5 Interesting Facts About The Rapper

Rachel Brosnahan Net Worth: 5 Awesome Facts About Her