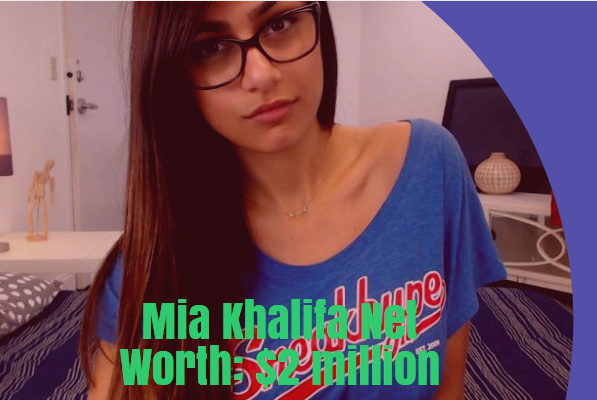 Here are some interesting facts about Mia Khalifa:

1. Mia Khalifa net worth is estimated to be $2 million.

Today because of the following that she was able to garner during her peak performance days, she has become a social media personality with more than 5.3 million followers on Instagram alone. Alone with some mischievous posts, she is regularly seen doing product placements and ads. She was even partnered with a famous Lebanese brewery promoting their products with the slogan “We are both rated 18+”.

2. Khalifa married when she was only 18 years old

Mia Khalifa was born on February 10, 1993, in Beirut, Lebanon. Her family moved to the USA when she was only 7 years old. After that, she grew up in Montgomery County and finished high school there.

In 2011, she married to an American man. Today, it is unclear about the relationship status for Mia but they have already separated according to some of her Twitter posts. Mia was a student at the University of Texas at El Paso where she graduated with a Bachelor of Arts degree in History.

Before her fame, Mia used to work for a popular food chain called Whataburger. In 2014, she was approached by a customer in the restaurant if she were interested in doing pornographic films seeing that she had a lot of potential.

Eventually, Mia came to terms and started officially working in October of that same year. She initially started with the name Mia Callista and later on shifted to Mia Khalifa.

4. She received death threats from ISIS

Being from Lebanon which is a more protective country in terms of women, she was heavily criticized for what she was doing. This criticism reached its maximum levels in most Middle East countries when she was seen performing a scene with a traditional Muslim costume called Hijab.

This sparked outrage across the Arab countries and she would go on to even receive a death threat from ISIS claiming that they would chop her head off. But it seems that Mia has ignored these criticisms as these videos are still among her highest viewed videos.

Mia is one who is not afraid to express her honest opinions regarding different topics on her Twitter feed which often leads to many cases of outrage. But Mia has stated that she actually enjoys this as with her recent comments regarding Women’s Wrestling where she negatively criticized the sport as completely fake and having no respect for the sport whatsoever.

Much to the dismay of many of her fans, she announced that she had left her previous career for other interests in life admitting that it was a just a rebellious phase during her life.

She is enthusiastic about sports and started to host a daily sports show with Gilbert Arenas on Complex News’ Youtube Channel. She has wanted to have a normal job for a long time and is trying to enter the profession of cooking. Her social media influence is definitely helping her new found interests as she has great engagement with her followers.

Cristin Milioti Wiki, Bio, Age, Net Worth, and Other Facts

factsfive - May 7, 2021
Cristin Milioti was born and raised in Cherry Hill, New Jersey. She has Italian, Belgian, Czech, and Irish ancestry, and calls her family "Olive...

Todd Phillips Wiki, Bio, Age, Net Worth, and Other Facts

Freddie Highmore Wiki, Bio, Age, Net Worth, and Other Facts

Kevin Alejandro Wiki, Bio, Age, Net Worth, and Other Facts

Sarah Silverman Wiki, Bio, Age, Net Worth, and Other Facts