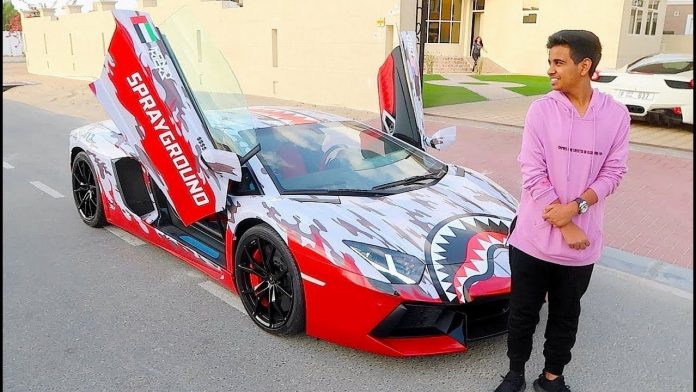 Rashed Belhasa, who is better known as Money Kicks, is a YouTube Vlogger and social media personality. He has created a large fan following by showing off his lavish lifestyle and love for sneakers.

He is also known to bring some of the biggest celebrities on the planet to his home and take amazing Instagram shots posing with his exotic animals.

Here are some interesting facts about Money Kicks:

1. His father is estimated to be worth $2.5 billion

Money Kicks net worth (exact) is hard to breakdown but his family has combined net worth of $2.5 billion. Rashed Belhasa was born on 5 January, 2002 in Dubai, United Arab Emirates. His father is Saif Ahmed Belhasa. Belhasa owns a number of businesses under the Belhasa Holding Group. The majority of his earnings though has been through his large investment in real estate and schools. There is no doubt that Rashed has been the beneficiary of his father’s wealth as it has fueled the exotic content through which he has become a social media personality today.

He is currently a full time student though he misses a lot of classes because of the events that he gets involved with. When he Is free, he devotes it entirely for his YouTube channel and working on building businesses. He is already starting to make his own earnings.

He is associated with Crep Protect for which he is the brand ambassador representing the middle east and receives a salary. With the rise of his popularity, he also does paid events around Dubai. He also looks to have the business characters of his father. At 15, he is already working on two clothing lines called Money Kicks and Kings of Ambition(KA1).

Rashed reportedly spends more than $5000 every month on clothes alone. With him known to be the buyer of some of the rarest sneakers that are present, it is expected that he probably spends more than $10,000 on sneakers per month. He even mentions how he once spent $8000 on one pair of sneakers alone!

He has more than 200,000 pairs of sneakers .He has been collecting these sneakers since his early teenage years. This has been one of the main attractions of his YouTube channel and even went sneaker shopping with Complex because of his popularity as the sneaker guy.

3. His family farmhouse has been visited by the most famous celebrities of the world.

His farmhouse boasts more than 400 exotic animals including lions, tigers, monkeys, cheetahs and panthers.  Some of the biggest names who have visited this exotic farmhouse include Shah Rukh Khan, Salman Khan, Tyga, Floyd Mayweather, Logan Paul, and Kim Kardashian. He has mentioned that Fat Joe was one of the most coolest celebrity that he has ever met.

His family’s farmhouse is home to some of the rarest and most exotic of animals.There are 50 lions in the farmhouse. He even has 6 ligers, a combination of a tiger and lion. This is impressive as there are only 60 of these species present today. His

4. He frequently collaborates with Mo Vlogs

The YouTubers have garnered millions of subscribers on their YouTube channel. Mo Vlogs is also based in Dubai and they have frequently collaborated on several occasions through both of their channels and show off their luxurious lifestyles.

He also has a show called “Sneaker Talk” on YouTube where he shows his sneaker shopping highlights and details about some of the best sneakers ever made. Mo has appeared several times on his sneaker hunting vlogs.

He says that he wants to be a clone of his father at a younger age than he was. Within 10 years, he is thinking about dominating the world of money by operating at least 10 businesses under his major Money Kicks LLC company. As he is getting older, he has also become more wiser and is starting to treat money in a business sense and look to invest that money to start businesses.

DJ Khaled is his role model because of his hunger for success. Money Kicks already has all the networks to some of the most talked about men and women present today. With his billionaire father to mentor him, it looks like Rashed Belhasa might replicate his father’s success.