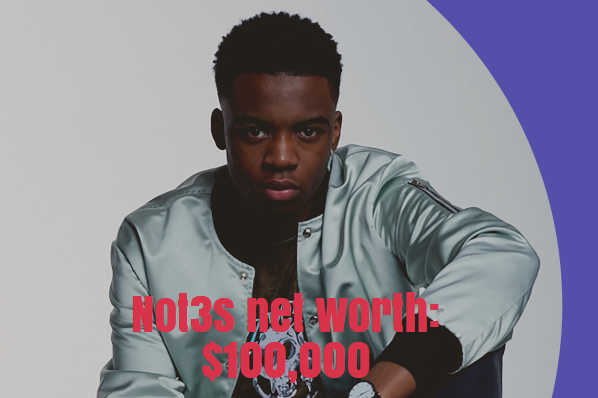 Not3s is an exciting new rapper from Hackney. He is garnering a name for himself as one of the emerging rappers from the UK. He is one of the young bloods out there who have come to the spotlight on his own.

This independent rapper came into prominence and today has built a solid and loyal fan base because of hit songs like “Addison Lee”.

Here are some interesting facts about Not3s:

As of 2018, Not3s net worth is around $100,000. After the success of Addison Lee, Not3s has been able to continue to keep the quality maintained in his songs. Even though he started only 2 years ago professionally, it looks like he is already ready to get a return on his hard work which included many sleepless nights.

He had a very successful “TakeNot3s tour. The concept for the tour in which he headlined the show was very engaging with his followers and has been applauded by many of his critics.

Many people in the rap industry in the UK are pursuing Not3s because of the potential that they have already seen in him. He has proved it that “Addison Lee” was not just a one hit wonder. With the success of his other singles, he has proved that he is a big time player and one to watch out for the future.

Not3s has said that has been in love with music ever since he was 4 years old. He apparently wrote his first song when he was only 8 years old. He has mentioned that his family as well as life experiences were the reasons that inspired him to fully commit for a career in music.

He does have some favorites in terms of artist who he loves. This list includes three artists, namely; Tory Lanez, Ed Sheeran, and Stormzy. He has said that he was star struck when he met Stormzy who he looks upon greatly. Stormzy had congratulated Not3s on one of his performances and it seems Not3s can’t stop complimenting the artist.

3. His stage name Not3s has a lot of meaning for him.

Not3s is actually pronounced as notes. This is a very unique name which many may not grasp upon the first time they hear it. But, Not3s has elaborated what his stage name truly means and what it stands for.

The “3” in his moniker signifies music notes, money notes and to take note of him and what he is set to become. He definitely is a driven young man who has complete clarity over what it is that he is in search for and says that among the three notes, music notes is most important to him because that is what he truly stands for.

4. Addison Lee gave him his own promo code.

He is one of the first ever musicians to collaborate with London based taxi firm Addison Lee. The song based upon their name has been his biggest hit of his career so far and has garnered millions of views on YouTube.

Stars like Louis Theroux tweeted about his song as well which made it go viral soon.  The song has definitely helped the taxi firm, who is in competition with Uber. They went on to give a promo code for Not3s and his fans exclusively.

Not3s even got the opportunity to perform for them in one of their events which he says was one of the most amazing experiences as a performer on stage.

He actually came up with the idea of the song as he used to use the taxi firm’s service as a daily commute from his residence to the studio in Stratford. Suddenly a beat popped in his mind and the lyrics naturally flowed. Within a month, the song would be released on Soundcloud.

5. There is a lot of diversity in his songs.

He explains that he always has an organic framework and process through which he produces his quality songs. He mentions that he simply loves music and anything that sounds good.

Therefore he experiments with different sounds from different genres like RnB, Afrobeats, pop, and rap which has helped his music to be very diversified.

Ashley Judd Wiki, Bio, Age, Net Worth, and Other Facts

Penn Badgley Wiki, Bio, Age, Net Worth, and Other Facts

John Krasinski Wiki, Bio, Age, Net Worth, and Other Facts

Gemma Arterton Wiki, Bio, Age, Net Worth, and Other Facts

Chris Martin Wiki, Bio, Age, Net Worth, and Other Facts

Vin Diesel Wiki, Bio, Age, Net Worth, and Other Facts