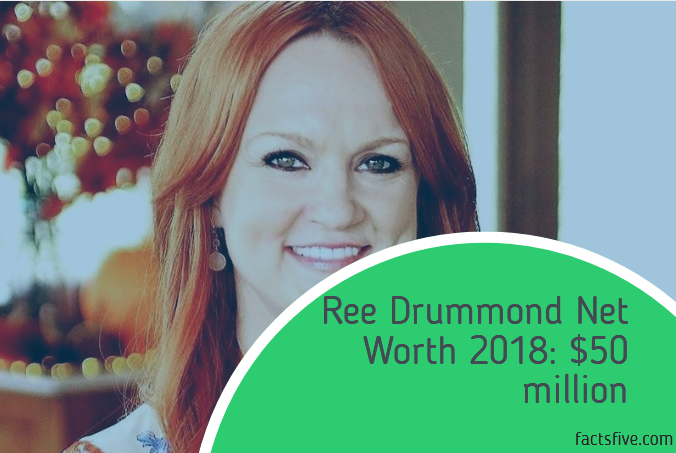 Ann Marie Drummond, who is known to the world famously as Ree Drummond is an American blogger, author, and a television personality.

Her rise to fame started back in 2006 when she started the blog called “The Pioneer Woman” showcasing her daily life in a ranch. Her primary purpose at the time was not to amass a following that she holds today, she actually did it to keep in touch with family about her kids growing up in the ranch.

Today that same blog has turned into an empire and she is the ruling queen of it. The blogger has gone on to star in a television series in Food Network since 2011.

Here are some interesting facts about the famous ranch wife:

1.Ree Drummond Net Worth is estimated to be over $50 million and her family is worth over $250 million.

As of 2018, Ree Drummond net worth is estimated to be over $50 million while her husband is worth over $200 million according to Celebrity Net Worth. Her husband Ladd Drummond who frequently appears in her content with the title of “Marlboro Man” is a man of huge assets. According to a recent report, Ladd’s family is the 23rd largest land owner in the United States measuring to a number of 433,000 acres.

Their land alone makes up half the size of Rhode Island which is why the Drummonds are estimated to be worth in excess of $250 million. Through such assets, they make $3 million from the land and obviously it has been key for Ree, as the blog blew up because of her showcasing her daily ranch life there.

2.She moved to the “ranch life” after marrying Ladd Drummond

In 1995, Ree was married to Ladd and decided to make the transition from the city to the ranch. She admits that such a change in environment definitely took time for adjustment. But their deep mutual love helped in making this new style of life easier.

The couple today have four children namely Todd, Paige, Bruce, and Alex. They also regularly feature in her blogs where she mentions about homeschooling the kids. Ladd has also become a celebrity of sorts because of his involvement in her blogs

3.Ree Drummond’s net worth alone is estimated to be $50 million

Ree has worked tremendously to build a beautiful and loving brand. She is now reaping the rewards of it as her blog today gets more than 20 million page views per month. Her income comes from endorsements and monetizations in the website.

She is also a best selling author to many cookbooks as well as children’s books. Some of her most popular ones include The Pioneer Woman Cooks: Food from My Frontier, Charlie and the New Baby, and Black Heels to Tractor Wheels ( memoir). She recently started her own magazine as well that is published by Hearst.

4.Her television series “The Pioneer Woman” airs in Food Network

She is also the main star of her television series “The Pioneer Woman” which is one of the most popular series running in Food Network since 2011. Today, the show has made her an international celebrity as the series has been very successful internationally as well and her fan base seems to be growing even more.

With the rise in success, the Drummonds recently invested in opening “The Mercantile” in Oklahoma that focuses as a deli, bakery and general store. She is also opening a small 8 room Inn near it soon. Her large base of loyal fans has led to these businesses thriving.

5.Her blog was originally titled Confessions of a Pioneer Woman

When she started out in 2006, she had actually title the name of the blog to be Confessions of a Pioneer Woman. Today that is only a segment in her blog and Pioneer Woman has been adopted because of its easier branding solutions.

She has become well known for her comfort food which are aimed at feeding the family, the recipes that she gives out as well her daily life in general and looks to be growing her empire further by the day.

Portugal The Man Net Worth: 5 Facts About The Rock Band

factsfive - February 28, 2018
Portugal The Band is an American rock band with its roots in Alaska. Even though the band have been in this field for a...

Jill Wagner Wiki, Bio, Age, Net Worth, and Other Facts

Amandla Stenberg Wiki, Bio, Age, Net Worth, and Other Facts

Marguerite Moreau Wiki, Bio, Age, Net Worth, and Other Facts

Amy Acker Wiki, Bio, Age, Net Worth, and Other Facts

Ben Platt Wiki, Bio, Age, Net Worth, and Other Facts

Jack Nicholson Wiki, Bio, Age, Net Worth, and Other Facts