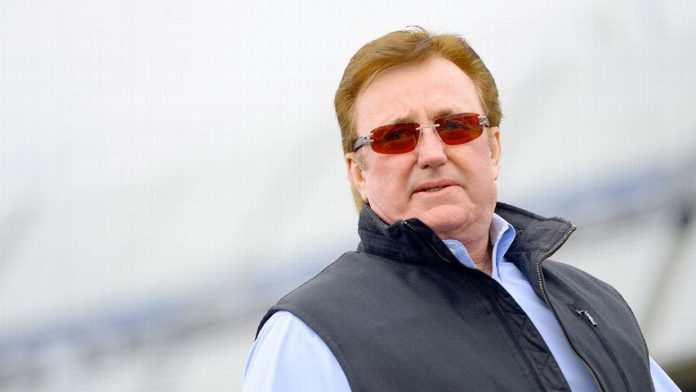 Richard Childress is a former NASCAR driver and  is currently the team owner of Richard Childress Racing (RCR). After finishing up with his career as a driver, Richard has had immense success as a savvy businessman raking in a large fortune and making him one of North Carolina’s wealthiest men.

Here are some interesting facts about Richard Childress:

1. Richard Childress net worth is estimated to be $250 Million.

As of 2018, Richard Childress net worth is massive $250 million. Childress has become one of North Carolina’s wealthiest men but it has not happened overnight. It has been a long time coming for Childress who has spread investments over a variety of fields with the majority of his money obviously being made through Richard Childress Racing (RCR).

With large cashflow in his bank account, Childress also started a vineyard in the Yadkin Valley AVA in his hometown back in 2004. He also lives a very luxurious lifestyle as he currently resides in Davidson Country in one of the largest mansions in that area.  He is also the main owner of Richard Childress Racing Museum.

2. Childress is an excellent manager but an average driver

His career as a driver actually started in an unorthodox fashion. After some of the top performers started a driver’s strike, he was selected as a scab driver.  The biggest highlight of his career was finishing third-place in 1978 at a race. He didn’t really have much going on as a driver but he did learn a lot about the business which led to the start of his empire.

His first significant win as manager came when his driver Ricky Rudd won a race. Since then it seems that he found what he was truly meant to be doing which was not driving. He really started gaining massive momentujm after recruiting Dale Earnhardt who won a lot of races for him.

3. His Richard Childress Racing (RCR) team has been one of the most successful teams in the history of NASCAR.

Childress started to develop a perfect framework for winning which included the recruitment of some of the biggest drivers. Some of these names included Kevin Harvick, Jeff Burton, Clint Bowyer, and Paul Menard.

His family looks to follow in the footsteps of Childress. They are mostly involved in the business as drivers. Best known are his grand sons Austin Dillon and Ty Dillon who seem to be listening to some of his advice.

4. Childress has been in the midst of many controversies

Being in the racing business and especially being the team owner of RCR, it is not always easy to control emotions. Childress has unfortunately lost his control over his emotions several times and sometimes has been unlucky with some decisions against him.

He was once involved in a physical fight with driver Kyle Busch. He is one of the Camping World Truck Series owner. The two reportedly got into a nasty fist fight with Childress punching Busch in the face. This was an embarrassing fight that included numerous insults and eventually led to Childress being fined a haefty amount of $150,000 by NASCAR.

He has also been involved in other allegations including one involving a feud between Kevin Harvick and Jeff Green. It ended sourly with Green being fired instantly but Childress was accused of favoritism.

Even though Childress has sometimes been in the spotlight for the wrong reasons, he has done a lot for the development of the youths pursuing a career as RCR drivers for those in his native hometown. His entrepreneurial contribution has definitely helped many families.

Childress is also a donor and along with his wife named Judy, they established The Children Institute for Pediatric Trauma in 2008. This is a great initiative from the couple whose main aim for it is to reduce the sad number of deaths and disability following injury to children less than 18 years old. The institute has been working rigorously for bringing results through its research and funding for related programs.

Marisa Tomei Wiki, Bio, Age, Net Worth, and Other Facts

Thomas Brodie-Sangster Wiki, Bio, Age, Net Worth, and Other Facts

Ron Perlman Wiki, Bio, Age, Net Worth, and Other Facts

Brandy Lewis Wiki, Bio, Age, Net Worth, and Other Facts

Zoe Saldana Wiki, Bio, Age, Net Worth, and Other Facts

Emily Osment Wiki, Bio, Age, Net Worth, and Other Facts