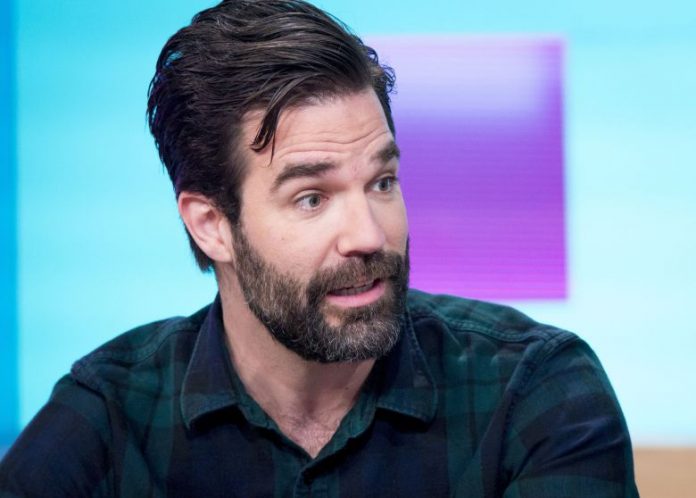 Rob Delaney is an American Actor, political activist, comedian and writer best known as the co-star and writer of the TV show “Catastrophe”. As of 2018, Rob Delaney net worth is estimated to be $3 million.

Here are some of the interesting facts to know about Rob Delaney.

Rob Delaney was born on January 19, 1977 in Boston, Massachusetts. He went to New York University’s Tisch School of the arts and graduated with a degree in musical theatre in 1999. Currently, he lives in London, United Kingdom.

Delaney gained worldwide prominence via Twitter. He started using social media sites in 2009 and as of 2018, he has over 1.45 million followers. He got people attention after he shared comedy posts on social media. He isn’t afraid to posts funny and new things on Twitter and by doing so, Rob became the first comedian to receive the “Funniest Person on Twitter Award” at The Comedy Awards in 2012.

As a writer, he works for several media outlets like Vice and The Guardian.

Rob started acting since 2007 but he was not famous back then. His first role came on movie “Wild Girls Gone” and since then he has appeared on movies and TV shows like Outer Space Astronauts, The Smoking Gun Presents: World’s Dumbest, Key and Peele, Life After Beth and many more. However, he got public attention for his role of Rob in series “Catastrophe” where he also worked as co-writer.

4.Rob Delaney was once alcoholic

Rob has publicly expressed his experience with clinical depression and alcoholic addiction. In 2002, he drove his car into a building owned by LA Department of Water and Power after being blacked out and in the process; he broke his left wrist and right arm. Delaney then stopped drinking and has been sober since 2002.

Rob Delaney is married and had three sons. On February 10, 2018 Delaney revealed that his older son Henry died from cancer. Henry was diagnosed with brain tumor in 2016 and his cancer returned last autumn. In an emotional post written by Rob on Twitter, he said:

“Henry was a joy. He was smart, funny, and mischievous and we had so many wonderful adventures together, particularly after he’d moved home following fifteen months living in hospitals.

“His tumour and surgery left him with significant physical disabilities, but he quickly learned sign language and developed his own method of getting from A to B shuffling on his beautiful little bum.

“I am desperately sad right now, but I can say with authority that there is good in this world. Thank you, beautiful Henry, for spending as much time with us as you did. We miss you so much.”

Gary Busey Wiki, Bio, Age, Net Worth, and Other Facts

factsfive - April 6, 2021
A blond-haired, fair-complexioned actor with a toothy grin and capable of an unsettling glint in his eyes, Gary Busey was born in Goose Creek,...

Ellen Pompeo Wiki, Bio, Age, Net Worth, and Other Facts

Cameron Ocasio Wiki, Bio, Age, Net Worth, and Other Facts

Ariadna Gutierrez Net Worth: 5 Facts You Should Know