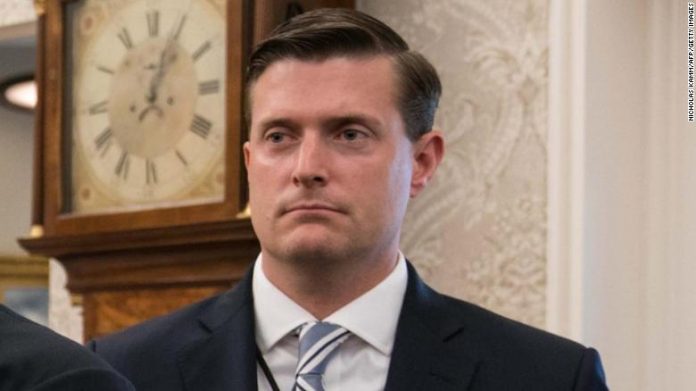 Rob Porter is a former White House Secretary for President Donald Trump. He served at the office from January 20, 12017 to February 7, 2018. Porter has resigned from his position after his two ex-wives claimed him of domestic abuse.

As of 2018, his exact financial detail is not available but Rob Porter net worth is estimated to be between $1 million and $2 million. Here are some of the interesting facts about the former White House staffer.

Rob Porter was born on 1977 in Boston, Massachusetts to Roger B. Porter. His father worked for President George H. W. Bush and was IBM Professor of Business and Government at Harvard University.

Before working as the secretary in the White House under Trump Administration, Porter served as the chief of staff for Senator Orrin Hatch from March 2014. Porter also worked for Senators Rob Portman and Mike Lee.

On February 7, 2018 he resigned from the post after allegations of domestic abuse were made public by his two e-wives. He served at the White House from January 20, 2017 to February 7, 2018.

3.His relationship and domestic violence against Colbie Paulson Holderness.

Rob Porter and Colbie Paulson began dating while they were at Harvard University. After Paulson graduated from the college, they got married. Prior to their marriage, they dated for around 3 years.

According to sources, their relationship began to collapse just after they got married. Rob first abused her while they were at honeymoon in Canary Island. According to Paulson, he lost control during the argument and kicked her.

After some time, Rob once again abused her during a trip to Italy. He threw her on a bed and forced himself on top of her, locking her elbows. He threw a punch on her left eye. At one point he even chocked her hard that she would pass out.

4.His relationship and violence against Jennifer Willoughby Porter

On 2009, Rob Porter and Jennifer Willoughby got married. According to her second wife, Jennifer he called her a f**k**g b***h on their honeymoon at Myrtle Beach between Christmas and New Year.

In an interview with dailymail, she said: “I can’t remember what triggered it. He lashed out and was really angry, and both under his breath and explicitly to me called me a ”f***ing b***h” and ”f***ing ridiculous”. He accused me of not caring about him or not caring about his needs.

She also said,’In the first weeks and months, his explanation for his anger was that his first marriage had been very toxic, rooted in arguments, accusations and manipulation and he was carrying over from that relationship.

Willoughby also claimed that, Porter puller her naked from the shower by the shoulders and yelled at her. According to the complaint filed with the police, he punched the glass on the door to their home, cutting his hand in the process.

Rob and Willoughby later got divorced in 2010.

5.He is currently dating Hope Hicks

Rob is currently in relationship with White House Communications Director Hope Hicks. They have been together since January 2017 and was seen leaving her D.C. apartment together.

factsfive - November 10, 2020
Rachel Bilson was born in Los Angeles, to Janice (Stango), a sex therapist, and Danny Bilson. Her father is Ashkenazi Jewish and her mother...

Brenda Song Wiki, Bio, Age, Net Worth, and Other Facts

Elizabeth Olsen Wiki, Bio, Age, Net Worth, and Other Facts

Wilmer Valderrama Wiki, Bio, Age, Net Worth, and Other Facts

Annie Potts Wiki, Bio, Age, Net Worth, and Other Facts

Sofía Vergara Wiki, Bio, Age, Net Worth, and Other Facts

Nick Offerman Wiki, Bio, Age, Net Worth, and Other Facts