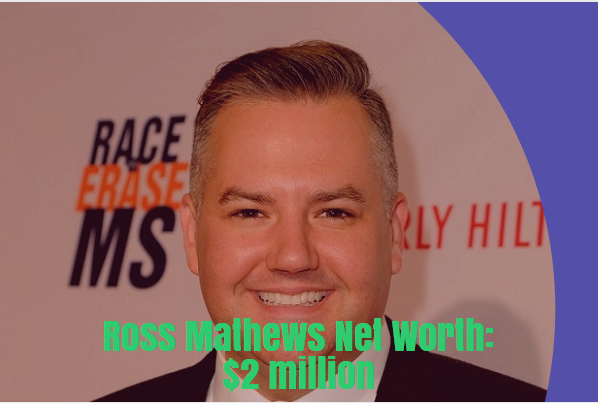 Ross Mathews is an American television personality who is currently working on the shows Hollywood Today Live and Live from E!. He is also a regular judge for RuPaul’s Drag Race.

Most recently, his name has been circulating all around media for his appearance as a contestant in the Celebrity Big Brother, the first official spinoff the Big Brother.

Here are some interesting facts about Mathews:

1. Ross Mathews net worth is estimated to be $2 million

As of 2018, Ross Mathews net worth is $2 million. Today, Mathews has become a household name as a television personality from when he initially started back in 2001. His large net worth is because of his popularity with his fans that have helped him sign some lucrative deals in the past.

He started to host Hollywood Today Live from early 2016 with his name getting bigger and bigger every day. Previously, Matthews was also known for producing and co-writing Chelsea Lately. This went on to be a massive hit for him.

Before he entered the Celebrity Big Brother, Ross previously competed in a popular reality show as well called Celebrity Fit Club in 2007 which was run on Vh1.

2. He started as an intern on “The Tonight Show with Jay Leno”

He developed most of his speaking skills in the mike when he was in college where he would frequently lead his college as a speech and debate competitor.

One of the major reasons for such a fast track in terms of popularity is because of the success of his own segment in the show called “Ross the Intern” which amused the viewers watching. This was a unique concept that would be a win-win for both Ross and the show as the audience seemed to love it.

This has helped him to kick start his career as he would constantly cover major events like the Oscars and many top-rated movie premieres primarily through his work as a major correspondent for E!. All the other works that he has done is the result of his breakthrough on The Tonight Show. Today, he does guest skits for the show.

Even Matthews himself admits the likes of an intern turning into a top television personality is very rare. He calls it “the most outrageous story involving an intern since Monica Lewinsky”.

3. Mathews is also an author

Matthews is a man with a great sense of humor and wrote a memoir of his life with the release of the book titled “Man Up: Tales of My Delusional Self Confidence” that was released in 2013. The book covered his journey from a small town to his success in the big cities with all the little details that are comical for the average reader with a deep meaning inside the book.

The book also contains some great insider stories about what happens behind the scenes in his life and a bunch of stories that have thrilled his fans. He also operates a podcast on a weekly basis called Straight Talk with Ross Matthews where his focus is primarily on the contemporary news that is around the entertainment industry.

He lives in Los Angeles with his partner Salvador Camarena who is a wardrobe stylist and interior designer along with his dogs. He also routinely stays at his Palm Springs home as well. They have been together since 2008 and is very open about his relationship with the stylist.

He says that Barbra Streisand’s lines from the song Funny Girl inspired Ross to speak out with full confidence.  He clarifies this with great comedy in his book. Today, they are seen regularly on social media with both funny and romantic posts of their life together.

He is also an avid supporter of the Human Rights Campaign and has made great positive utilization of the following that he has, to spread words about some significant problems and the changes that needed in today’s society.

He regularly keeps his followers updated on social media about his recent activities and urges them to be part of the campaign as well. He also speaks at many events throughout the country, and for such a contribution, is also the recipient of the Visibility Award in 2011.