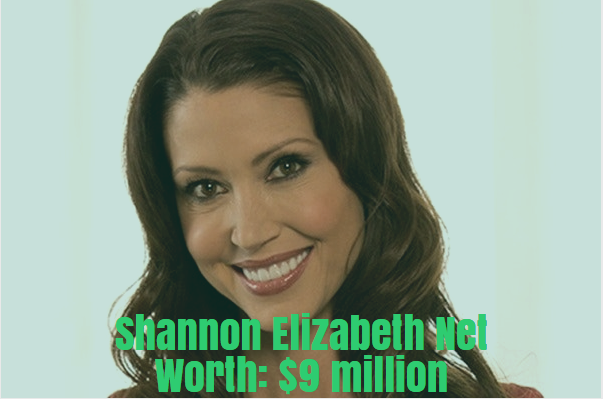 Shannon Elizabeth is an American actress who is known for her roles in hit films like American Pie, Scary Movie, Thirteen Ghosts, and Night of the Demons.

In recent years, she has slowed down on her acting career to focus on other projects that she believes in. She has been in front of the spotlight for her fans most recently in the reality show called Celebrity Big Brother.

Here are some interesting facts about Shannon Elizabeth:

1. Shannon Elizabeth Net Worth is estimated to be $9 million

As of 2018, Shannon Elizabeth net worth is $9 million. She has made the majority of her money through her career as an actress and a model over the years. She was able to land major film roles for Scary Movie, Jay and Silent Bob Strike Back, and Tomcats soon after the success of American Pie. These handful of films alone have helped her net worth to be of such a high amount.

Her beauty has also landed her many modeling jobs. Right after high school, she had a contract with Ford & Elite models which officially started her career as a model. She was the cover girl for Maxim in June 2008 and has appeared in the magazine frequently.

But her main love is still with acting and in recent years has also made some cameo appearances in That ‘70s Show and NBC’s Thank God You’re Here. In 2009, she also hosted a comedy series called “Live Nude comedy”. Currently, she also co-owns a vegan jewelry line called Shansen Jewelry along with her cousin Tamsen Fadal.

2. She became wildly known for her infamous scene in American Pie

She played the role of Nadia, a foreign exchange student in the super hit box office sensation American Pie back in 1999. Her scene with Jason Biggs, who played the role of Jim Levenstein is one that the fans still have in memory.

This infamous and awkward bedroom stripping scene would spread her name and definitely played a part in the success of the film as well. Her role of Nadia would continue as she would appear in its sequel series American Reunion as well.

3. She considers poker her second career

Elizabeth is an avid poker player and was even referred as a leading celebrity poker player in 2006. That same year, she beat more than 80 celebrities and professionals at the newly opened Caesars Palace hotel to win a total prize money of $55,000.

She was an often visitor to Las Vegas considered as the home of poker by many. She has cashed four times in the World Series of Poker in 2006 and 2007. IShe also reached the semi-finals of the NBC National Heads-Up Poker Championship in 2007 which shows that she is a top poker player.

4. She was married to Joseph D. Reitman

Elizabeth married Joseph D. Reitman in 2002 but their relationship would last only until 2005 with the divorce being finalized in 2007.  She was also shortly in a relationship with Derek Hough, her partner when they were paired together for the competition Dancing With The Stars. They eventually split after dating for a year.

More recently, she has been spotted multiple times with producer Russell Simmons and have been seeing each other. Both of them are environmentalists which could be one of the reasons that they have been seen as a couple recently.

5. She has a non-profit organization called Animal Avengers

She is an animal activist and environmentalist. She founded the non-profit organization called Animal Avengers whose purpose is to rescue animals and give them a much needed home. She has a lot of love for stray dogs and has utilized her title as an actress very efficiently for their betterment.

This is why Elizabeth has been very active in fundraising programs and attending charity events for the support of such causes. She had even come up with a unique campaign that sent the message to adopt a turkey rather than serving it on the plate for Thanksgiving. She has described her eating habits in her website as vegetarian, vegan, and gluten-free.  She is actively seen in social media platforms promoting her projects, her most recent one being to raise awareness about rhino poaching.