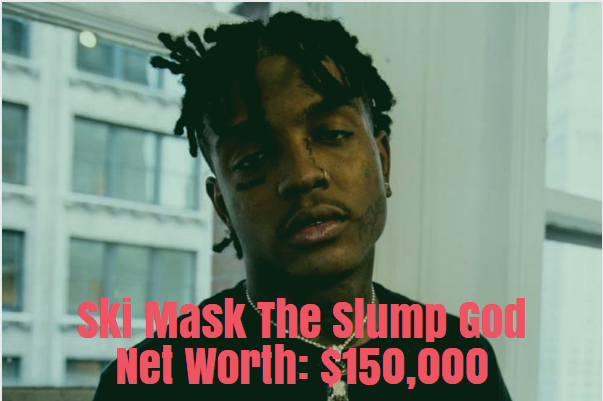 Ski Mask The Slump God is an emerging young rapper from Florida. He has made his name through songs like “Catch Me Outside” and “BabyWipe”.

The young artist is a prime example of how the prolific use of the Internet can help shape a career. For Ski, he has risen to fame today because of his early beginnings of uploading music in SoundCloud.

His album “You Will Regret” was released on June 30, 2017.  Some of his own personal works that he has a liking to are “The Human Centipede”, ”Young Voorhees”, and “Where’s the Blow”.

Here are some interesting facts about The Slump God:

As of 2018, Ski Mask The Slump God net worth is estimated to be around $150,000. It has not been very long since the rapper first emerged in the hip-hop scene for the public eye to view. He has used social media very effectively to establish a brand name that many young viewers find intriguing and unique.

With over 1.7 million followers on Instagram alone, Ski has promoted most of his music from such platforms. He has made his money through the sales of his music online and has also done many live performances. But things are just starting out for the rapper and with probable International tours coming, his net worth could see mountainous rise.

2. His real name is Stokeley Goulbourne.

Ski was born Stokeley Clevon Goulbourne on April 18, 1996 in Broward County, Florida.  He didn’t grow up there alone as his family moved around to different cities including Brooklyn, Atlanta, and New Jersey.

These cities had an environment surrounded by hip-hop which showcases how his passion for becoming a rapper initially started.

Ski admitted that Lil Wayne is probably the Greatest of All Time. His music and style had a big impact upon his own type of music today.

Growing up he would listen to many New York rappers as well including Jim Jones and Hurricane Chris. He also mentions names like Method Man and Redman. Some honorable mentions from him include Wu-Tang Clan, Missy Elliott, and Ludacris.

Many have noted to him that his style somewhat correlates to that of Busta Rhymes. Ski says he liked the artist very much but denies that they have a congruent appeal and musical style.

The rapper is known to have an up and down kind of relationship with native Florida rapper XXXTenacion. Their friendship at the detention center would eventually lead to the formation of the group called Very Rare. It produced 3 EP’s Members Only- with 3 volumes.

The rapper showed his dedication for the group by having a face tattoo with the writings being “Very Rare”.In recent times though, the two have not been on the same side as XXXTenacion reportedly denied Ski’s request to be on a song with him with a fiery public post on social media.

5. His ultimate goal in hip-hop is to simply “have fun”.

Ski has admitted about how he’s perception regarding things has changed drastically. He mentions how at first while he was just getting into hip-hop his prime aim was to prove to those that didn’t believe in his abilities.

But today he has a different perspective about his ultimate goal in for a career in hip-hop. It is more self-centered and ignores all the negativity. He simply wants ton “have fun”.

He wants to enjoy his profession fully by doing what it is that he wants to do and not following a certain trend and a crowd ending up being someone completely different from yourself.

It’s not about being the best for him but to enjoy his work and let other people have fun as well. He might be a big problem for the other rappers as there is very high competition for the audience groups. He is very confident in his style and musical attributes that other rappers will eventually have to accept the fact that he’s present.

With the shape of hip-hop and its preferences from people changing drastically and pretty unpredictable for the coming years, he looks very confident in his own unique style.

Ron Perlman Wiki, Bio, Age, Net Worth, and Other Facts

Matt LeBlanc Wiki, Bio, Age, Net Worth, and Other Facts

Justin Chambers Wiki, Bio, Age, Net Worth, and Other Facts

Sam Rockwell Wiki, Bio, Age, Net Worth, and Other Facts