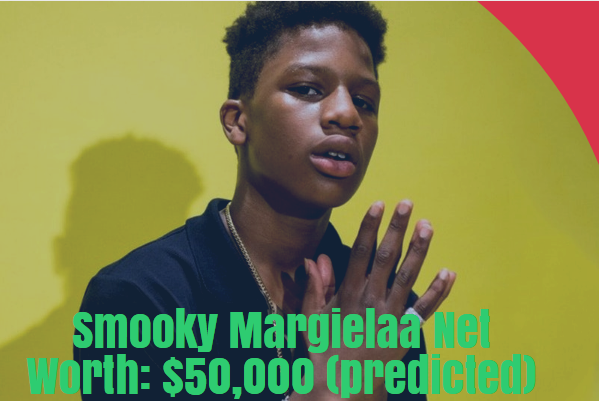 Smooky Margielaa is an emerging rapper from Bronx, New York who is best known for his viral hit called “Stay 100”. The young rapper is only 15 years old and has already made his way into the top-tier of the hip-hop industry.

Smooky Margielaa net worth is estimated to be around $50,000. Other 15 year old kids are busy in school but Margielaa is already on the path to his dreams. Even at such a young age, he has found success as an artist commercially. He already has more than 160K followers on his Instagram page which is one of the main medium to promote his music.

He is seen with the freshest of merchandise and sneakers in his posts which showcase that he already has quite a good sum of money in his bank account. His networks with some of the brightest talents in the industry has helped him to leapfrog over many others who are way older than him. He is currently in his Margielaa Madness Tour which has sold out in many places already. The future looks great for the young rapper who mentions how he is getting more and more comfortable on stage with every performance he makes.

2. His father was a famous singer and guitarist.

His father, Abdoulaye Diabate is one of the main reasons for his success. His dad is a well-known artist and used to take his son to his studios and on tours when he was only seven years ago. In a way, music is definitely in his blood.

It is because of his father that Margielaa was exposed to the works of Michael Jackson who had a large influence on him. He used to perform at different venues doing the legendary singer’s covers and started gaining reputation for it from a very young age.

One of the main motivating factors for him at such a young age was that he used to get paid for doing his performances in events. This gave him the internal push that was needed in order to be a entertainer from such a tender age.

A lot of his early found fame is not because of his father but because of his solo single “Stay 100”. The viral song was produced by CashMoney AP. In an interview, Margielaa mentioned that the song reflected upon the hate he used to get before he was famous and was written during a trip to Los Angeles.

This became the breakthrough song for Margielaa which opened up so many paths for him. He pounced upon all of those opportunities which is the reason the name Smooky Margielaa has stuck upon our heads.

4. He is originally from Mali.

He is originally from Mali, West Africa. He grew up in the Bronx, New York which is sometimes called the home to hip-hop by many stars. Growing up in such an environment also had a large impact upon his decision to pursue rap.

He used to love going to school to meet with his friends but now he mentions that things are completely different. He has home-schooling at Keystone High School and a tutor who coincidentally is his manager today.

5. He is considered as A$AP Rocky’s  protege

He met A$AP Rocky for the first time a year ago and he’s life has not been the same ever since then. They actually met at a club where Margielaa had to sneak his way into as he was underage. There he went on to get the hold of the mike and perform. He made a great impression upon the veteran rapper and soon became a part of his team.

That night, he got A$AP Rocky’s number and they would later go on to have a great relationship together. Margielaa has considered this to be the turning point of his career and many today even refer to Rocky as his protege. He even appears on five songs for A$AP Mob’s mixtape called Cozy Tapes Vol 2: Stay Cozy.

factsfive - March 18, 2018
Aaron Kaufman is an American mechanic who is best known for appearing as one of the stars of the show called Fast N’ Loud....

Ian Somerhalder Wiki, Bio, Age, Net Worth, and Other Facts

David Fincher Wiki, Bio, Age, Net Worth, and Other Facts

Kate Winslet Wiki, Bio, Age, Net Worth, and Other Facts

Steve Harvey Wiki, Bio, Age, Net Worth, and Other Facts