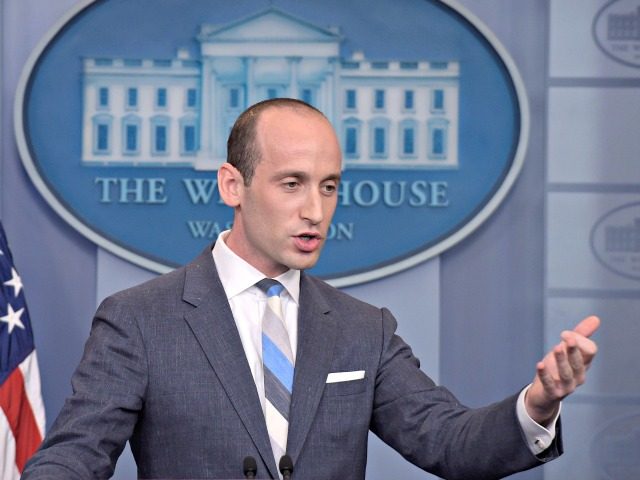 Stephen Miller is a controversial political figure due to his explosive and heated arguments with reporters time to time. He is currently the Donald Trump’s senior advisor for policy and also was former communications director for Jeff Sessions.

While many former top advisors like Sean Spicer, Steve Bannon, Reince Priebus and other top officials earned $179,000 annually, Miller’s salary of $179,000 also falls in that category. Members of Trump administration are filthy rich; Director of National Economic Council Gary Cohn has net worth of around $266 million, Former White House Chief Strategist Steve Bannon is worth $20 million, Secretary of Commerce Wilbur Ross is worth $860 million, Secretary of Education Betsy Devos is worth $5.1 billion and the lists goes on and on. But according to financial disclosure revealed by New York Times, Steven Miller is not even worth in millions. His form showed that he had $63,000 to $245,000 in assets and other income including Mobile Improvement District bonds worth between $15,000 and $50,000. Combining all his assets and salary, we estimate Stephen Miller net worth to be around $400,000.

Stephen Miller was born on August 23, 1985 in California as the second of three children to Michael D. Miller and Miriam Miller. Stephen attended Santa Monica High School and then received his bachelor’s degree in political science from Duke University. During his time at University, he served as president of the Duke chapter of Horowitz’s Students for Academic Freedom and wrote conservative columns for school newspaper. He has been a disciplinarian on immigration and racial issues. He used to go to conservative radio program to share his views on immigrants and other issues when he was 16. Miller wrote op-ed for his high school’s student newspaper defending the U.S. Invasion of Afghanistan when he was only 18 years old. In 2003, he sent a letter to local news issuing the problem of English language learners and Latino students at his high school.

After graduating from college, Miller worked with several high profile politicians. He worked as a press secretary for Michele Bachmann and Congressman John Shadegg. He then started working for then Alabama senator and now Attorney General Jeff Sessions in 2009 as a position of Communications director. Miller was given a role of writing many speeches about the bill. Miller and Sessions’ partnership would strongly influence Donald Trump and in January 2016, he joined Donald Trump’s 2016 presidential campaign as a senior policy advisor.

In November 2016, Trump named Miller national policy director. On December 23, 2016 the team announced that he would serve as Senior Advisor to the President for policy during the administration. He worked with Jeff Sessions, Steve Bannon laying down several plans to restrict immigrants to enter the United States of America. Miller and Bannon were also responsible in travel ban that restrict people to enter United States from seven Muslim countries. He also acted as the engineer behind the Trump administration decision to reduce the number of refugees accepted into the United States.

4.He had heated exchange with CNN’s Jim Acosta

During White House daily briefing regarding the immigration policy, Steven Miller had a heated exchange with CNN’s Jim Acosta. Acosta asked “Are we just going to bring in people from Great Britain and Australia?” Miller than replied with fury saying “I am shocked at your statement that you think that only people from Great Britain and Australia would know English. It reveals your cosmopolitan bias to a shocking degree. Acosta then told Miller that “it sounds like you are trying to engineer the racial and ethnic flow of people into this country. Miller called Acosta’s statement “outrageous, insulting, ignorant and foolish”. Miller later apologized to Acosta for his tone.

5.His contentious interview with CNN’s Jake Tapper was shut down in the middle.

Recently, Miller appeared on CNN’s Jake Tapper Show “Stat of the Union” to talk about new book “Fire and Fury: Inside The Trump White House”. In an interview, miller said “Donald Trump is a political genius who took down the Bus dynasty, who took down the Clinton dynasty and who took down entire media complex”. Tapper replied saying that there was only one viewer you care about right now. He also said “I think I’ve wasted enough of my viewers’ time. Thank you, Stephen” bringing the interview to an end. According to sources, Miller refused to leave the studio and had to be escorted out by security after the interview was over.

Joe Alwyn Wiki, Bio, Age, Net Worth, and Other Facts

Will Rogers Wiki, Bio, Age, Net Worth, and Other Facts

Peyton List Wiki, Bio, Age, Net Worth, and Other Facts

Justin Timberlake Wiki, Bio, Age, Net Worth, and Other Facts

Adrienne Houghton Wiki, Bio, Age, Net Worth, and Other Facts