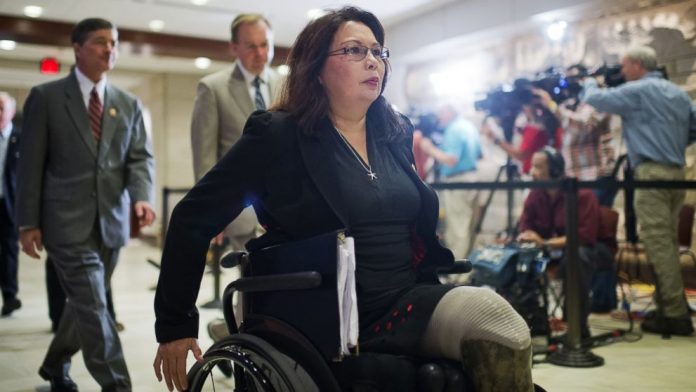 Tammy Duckworth is an American politician representing as the junior United States senator for Illinois. She is the member of Democratic Party and is also a retired U.S. Army Lieutenant Colonel.

Here are five interesting facts about Tammy Duckworth including her net worth, family, military career and more.

Tammy Duckworth was born on March 12, 1968 in Bangkok, Thailand. Her mother Lamai Sompompairin is of Chinese descent and her father Franklin Duckworth is of American descent. Her father served in both World War II and the Vietnam War.

Duckworth attended Singapore American School and then International School Bangkok. Tammy and her family relocated to Hawaii when she was 16 years old. Upon arriving there, she graduated from McKinley High school. She then graduated with a Bachelor of Arts in political science from University of Hawaii and then received Masters of Arts in International Affairs from George Washington University.

3.She lost her both legs while serving in Iraq.

Duckworth became a commissioned officer in the United States Army Reserve in 1992 and chose to fly helicopters as her job. In 2004, she was deployed to work in Iraq. During that time, she lost her right leg near the hip and her left leg below the knee when the helicopter she was co-piloting was hit by a rocket by Iraqi terrorists.

The explosion also completely destroyed her right arm, breaking in three places. She was honored with a Purple Heart awards and then promoted to Major on December 2004. She was also honored with an Air Medal and Army Commendation Medal awards.

Before she got elected to work in Congress, Duckworth represented Illinois’ 8th district from 2013-2017 in the United States House of Representatives. She also worked as Assistant Secretary for Public & Intergovernmental Affairs in United States Department of Veterans Affairs.

In 2015, she announced that she would run for Senate. She challenged U.S. Senator Mark Kirk in the 2016 Senate election and she defeated Republican Kirk for the seat in United States Senate. Duckworth is second Asian-American woman serving in the Senate after Mazie Hirono and Kamala Harris.

Tammy Duckworth married Bryan Bowlsbey in 1993. Together they have one daughter named Abigail who was born in 2014. She is also expected to give her second child in spring of 2018. In doing so, she would be the first sitting U.S. Senator to give birth while in office.

factsfive - January 20, 2018
Recently, Ed Sheeran announced on Twitter that he is engaged to his childhood friend Cherry Seaborn. So, who is Cherry Seaborn, what does she...

Kristin Cavallari Wiki, Bio, Age, Net Worth, and Other Facts

Miranda Cosgrove Wiki, Bio, Age, Net Worth, and Other Facts

Tim Burton Wiki, Bio, Age, Net Worth, and Other Facts

Ree Drummond Net Worth: 5 Facts You Should Know

Christian Bale Wiki, Bio, Age, Net Worth, and Other Facts

Rocky Parker Wiki, Bio, Age, Net Worth, and Other Facts