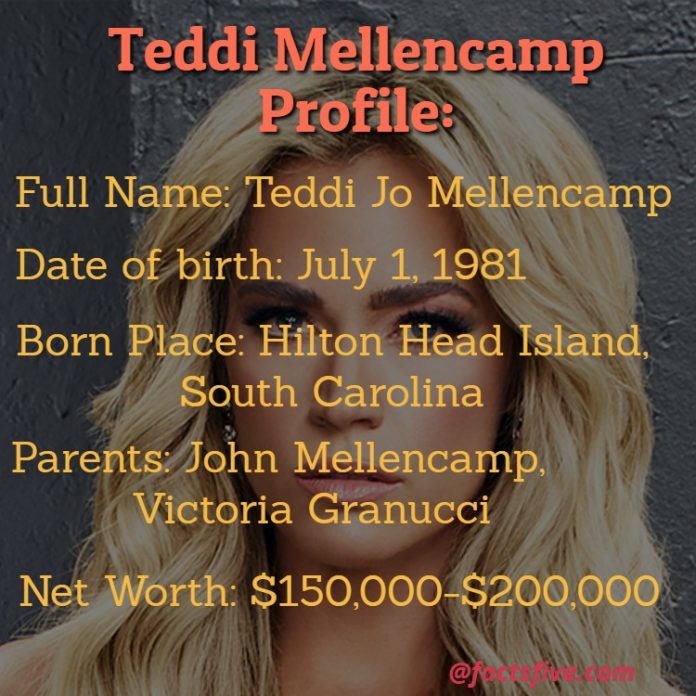 Teddi Mellencamp is the recent star to join the cast of The Real Housewives of Beverly Hills. What we know is that she is 36 year old daughter of legendary singer John Mellencamp. Fans are eager to know about her personal life, marriage and net worth of Teddi Mellencamp. So, let’s find out earning details and some interesting facts about her.

Her father John Mellencamp has an estimated net worth of around $25 million but it’s very hard to evaluate Teddi’s net worth considering the fact that she has been out of mainstream media for so many years. According to bustle, Teddi worked for both CAA and UTA and the average salary for a talent agent is about $60,000 per year. According to Forbes, superstar with millions of followers can rack up to hundred of thousand dollars for a single post. With 63K followers on her Instagram account, she might be making some dollars per post. According to our estimate, we can say Teddi Mellencamp net worth falls in the range between $150,000 to $200,000.

1.Teddi is the daughter of legendary singer John Mellencamp

Teddi was born on July 1, 1981 in Hilton Head Island, South Carolina to John Mellencamp and Victoria Granucci. According to her profile, she is nationally ranked professional equestrian and now an accountability coach. Her father John Mellencamp has been nominated for 13 Grammy Awards and has won one. He was popular in 1980s yielding popular songs like Hurts So Good, Jack & Diane, Pink Houses, Small Town, Paper in Fire and many more. Due to his musical influences, John was inducted into Rock and Roll Hall of Fame in 2008.

2.She is married to Edwin Arroyave

After she moved to California, she married businessman Edwin Arroyave in 2011. Edwin is the founder of Skyline Security Management, Inc. In his profile, it states that he was born in Colombia and moved to Los Angeles as a toddler with his parents and older sister Adriana. Edwin was the main man in his house as he had to take care of financial responsibility for his family. In 1999, he opened a security business that expanded as far as Puerto Rico and in 2004, he opened his own business Skyline Security Management, Inc.

According to DailyEntertainmentNews, Teddi was previously married to Matthew Robertson. While details about her ex-husband is not available to us all we know is that the couple met on an blind date that started out with a miscommunication on start time. The couple got married in Bloomington, Indiana on June 3, 2006 and John Mellencamp even performed at the reception.

4.She has three kids

We came, we saw, we skated and no one cried until the very end when the port o john was out of toilet paper…#iceskating #love #wintervacation #family

Together, Teddi and Edwin have two children named Slate and Cruz. Edwin also has a daughter named Isabella from a previous relationship as well. Slate is now 5 years old and Cruz is 3 years old.

Teddi Mellencamp is also a professional fitness coach. She provides fitness related tutorials and tips on her personal blog LA Workout Junkie. On her personal blog, she has shared some information about her saying:

“I am a mom, stepmom, wife, former nationally ranked professional equestrian and now an accountability coach. Throughout my life my weight fluctuated many times; I would pretend that those highs and lows didn’t affect me but that just isn’t the truth. At my heaviest, I felt lonely, sad and angry. At my smallest, I felt panicked, stressed and worried that I would gain the weight back. I very rarely felt great in my own skin. After struggling to get pregnant with my son and undergoing multiple IVF treatments, I gained 80+ pounds. I was thrilled to have my healthy baby boy but was left feeling broken inside. In order to be the best mom, wife and version of myself I knew things needed to change!”