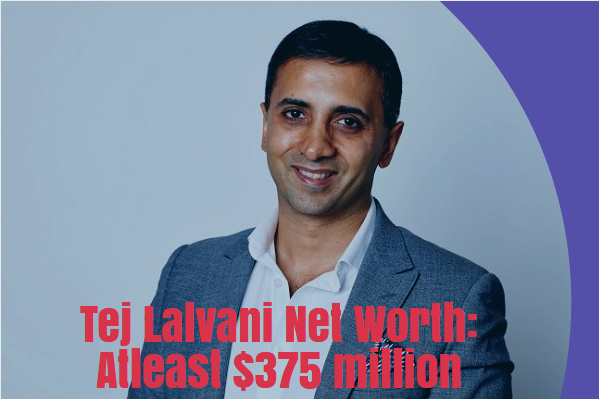 Tej Lalvani is a British-Asian businessman, who is best known as the running Chief Executive Officer(CEO) of Vitabiotics. Today, the company has been able to establish itself as the largest vitamin company based from the UK.

Lalvani is also involved in many other projects, one of them which many business-savvy people are curious to watch the BBC television series called Dragon’s Den where he is set to be one of the dragons for its latest season. Lalvani along with Jenny Campbell are set to be the new investors in the highly proclaimed show.

Here are some interesting facts about Tej Lalvani:

1. Tej Lalvani net worth is estimated to be more than $375 million.

As of 2018, Tej Lalvani net worth is estimated to be more than $375 million. Being the CEO of the largest vitamin supplier in the UK with its reach beyond 100 countries. This is a company with a global vision and Lalvani is the leader of the pact. The company sells vitamins like Wellwoman, Perfectill, and Pregnacare which are some of the most popular and useful vitamins in today’s context.

In its most recent report, it was estimated that the company did over $450 million turn over last year with estimations of even more growth anticipated this year. He also owns and manages a property investment business based in London with his wife Tara Ruby.

Lalvani has inherited the company from his father, Professor Kartar Lalvani who is currently the Chairman for the company. After finishing his doctorate in Medical Chemistry, his father launched Vitabiotics as a neutraceutical firm in 1971.

Lalvani Senior has played a major role in establishing the company to the height that it is present today and has also made the transition to step down and for his son to take over the company easier because of the mentorship that he was able to get from the founder.

Tej Lalvani  is from Indian descent. His mother was actually a former Miss India and a Miss-World runner-up. Growing up to such adept and capable personalities, Lalvani definitely benefitted through their mentorship and the values that they instilled in him.

3. He started working at the company as a forklift driver.

Contrary to what many might think, after joining Vitabiotics, Lalvani wasn’t given a major role right away. He actually started at the very bottom by working as a forklift driver and sticking product labels on boxes in the warehouse.

He mentions how his father was harder on him and was never given special treatment. Today, it is because of such a philosophy of his father and Tej’s dedication to thrive in the business that he was able to be named as the Chief Executive Officer by 2008 and the main man since 2015.

4. Lalvani wanted to be a movie director when he was young

If Lalvani were not looking after a multi-million dollar family business, he probably would be in the movie industry.

He has had interests in music and movies from his teenage year and even today is involved in music when ever his busy schedule allows him a break. He is also a music composer and can fluently play instruments like the drums, keyboard, and the guitar.

5. He has won a large number of accolades for his abilities as an Entrepreneur.

He has won several accolades in the world of business. He is only 43 years old but he has been able to establish himself as one of the most influential businessmen present today.

In 2012, he was named as the Young Entrepreneur of the year at the Asian Business Awards . He won this same title at TiE the succeeding year. He has also been able to manage a spot in the GG2 Power List at number 48 as one of the most influential Asian people in Britain.

His company won Boot’s Overall Supplier of the Year in 2013 and was also able to grab the Queen’s Award for Innovation in vitamin research that same year. Today the company also gives back to society by supporting a charity called Bliss which is focused on improving the lives of women and babies in Britain.

factsfive - March 4, 2018
Emma Hannigan Wiki Emma Hannigan was an Irish author known for her books like The Heart of Winter, The Secrets We Share, Perfect Wives, Letters...

Pete Davidson Wiki, Bio, Age, Net Worth, and Other Facts

Kate Walsh Wiki, Bio, Age, Net Worth, and Other Facts

Jaeden Martell Wiki, Bio, Age, Net Worth, and Other Facts

Scott Eastwood Wiki, Bio, Age, Net Worth, and Other Facts

Naya Rivera Wiki, Bio, Age, Net Worth, and Other Facts