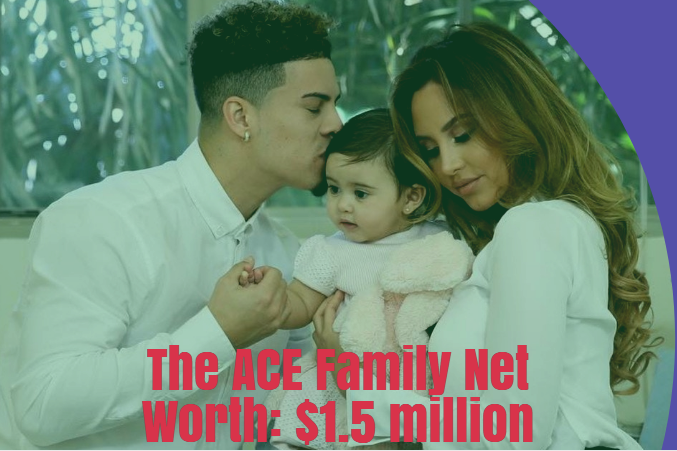 The ACE Family is a popular YouTube channel which is run by two popular YouTube stars Austin McBroom and Catherine Paiz. The YouTube couple from California runs prankster channel that contains mainly family content and challenges.

Here are some of the Interesting facts about The ACE Family:

As of February 2018, The ACE Family net worth is estimated to be around $1.5 million. The ACE Family channel consists of girlfriend & boyfriend Austin McBroom, Catherine Paiz and their lovely baby Elle.

Their main source of income is from YouTube monetization and from sponsorship and endorsements. Generally YouTubers are paid between $2 and $5 dollars per 1000 views. Taking that into consideration, The ACE Family has accumulated 5.5 million subscribers and 850 million+ views so far. On Calculation, they generate around $6000+ per day.

Austin McBroom who is one third member of the group ACE Family is a fine basketball player. He is a NCAA Basketball player who once played for Saint Louis University in 2011/12 season. He was born on May 20, 1993 in California and attended Campbell Hall School where he developed interest in sports. During his time at senior year, he averaged 25 points per game and was selected to first team all CIF Division 3AA.

3. Catherine Paiz is also a model.

Catherine was born on August 24, 1990 in Canada. She has two younger brothers named Ryan and Josh and one younger sister. Catherine and her family first moved from Canada to Florida but later decided to move to California instead.

After graduating from St. Louis College, she started her career as a model. As a fitness model, she has modeled for Azzelia Swimwear and also worked as the VIP Manager at Arkadia Miami. Apart from modeling, she is also seen in movies like Lilin’s Brood, Monday Nights at Seven and You Can’t Have It.

She is very popular on Instagram where she has over 3.1 million followers.

4. Some of their videos have received massive views.

The channel run by the popular family has received massive subscribers and views. As of February 2018, their channel has accumulated over 5.5 million subscribers and over 850 million views. Some of the videos like “The Best Prank of All Time”, “Epic Car Accident Prank” and “The Best Proposal of All Time” have all been watched over 12 million times. Some of their funny videos like “Break Up Prank On Girlfriend”, “World Hottest Hot Sauce Prank On” and “Daddy Pranks Baby with Huge Teddy Bear” have also been watched over 7 million times.

5. Austin and Catherine are engaged.

Catherine and Austin began dating since 2015. They welcomed their daughter named Elle (who is now one-and-half- years old) in May 2016. They became engaged on August 2017. The couple recently announced they were expecting their second child in February 2018.