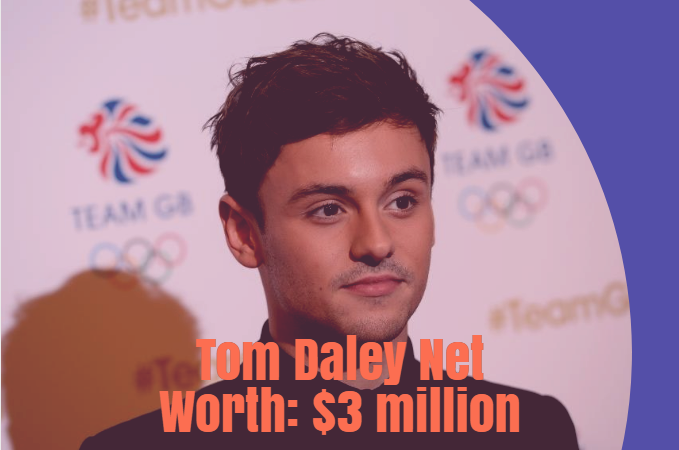 Thomas Robert Daley, who is better known as Tom Daley, is a British diver. He shot to fame at the tender age of 15 after winning the 2009 FINA World Championship and has maintained it today with a consistent set of performances in similar events till today.

Here are some interesting facts about Tom Daley:

1. Tom Daley net worth is estimated to be $3 million

As of 2018, Tom Daley net worth is estimated to be $3 million. Daley has a large net worth because of his dominance in the field of diving for Britain. This being an Olympic sport has meant that being one of the top dogs has helped him land hefty checks as well as sponsorship deals because of his popularity.

He is very active in social media as well as YouTube creating an entire community by sharing their lives with the fans. Daley has also been active in terms of the media lately and recently even hosted the Virgin Holidays Attitude Awards.

He began developing his abilities as a diver at the age of 7 when most kids were busy with their daily cartoon shows. He initially became a member of Plymouth Diving Club being a native of Plymouth in England.

This was a great decision from the side of his parents as it would lead to the exposure that would impress scouts and by the age of 9, he had already started competing in both national and international tournaments in Britain.

He has shared that during his childhood, he grew up watching the likes of Canadian diver Alexander Despatie who really stood out for him. Looking at the talent he possessed, British diver Leon Taylor coached and mentored him.

3. He became the youngest competitor at the 2008 Summer Olympics.

He became the youngest competitor at the 2008 Summer Olympics competing in the diving tournament at the age of 14. This was definitely something for the whole of Britain to be proud of.

He also became the youngest person to win a gold medal at the European Championships that were held in Eindhoven. During this specific time in his career, Daley had a difficult time getting into competitions because he was too young!

In terms of ability, he could already match it with those a lot elder than him but managing the age criteria was a headache for him. He would go on to be named as the 2007 BBC Sports Personality of the Year Young Personality Award.

He has also followed other interest like fitness with his book called Tom’s Daily Plan which is mostly about his diet and fitness secrets. He also actively vlogs about fitness in his YouTube channel. He has also released a memoir called My Story which tells his rise to the Olympics amidst the death of his father at the age of 40 to brain cancer.

In 2013 and 2014, he was also heavily involved with the show called Splash! Which saw celebrities compete against each other and learning various dives.

Through the platform offered by YouTube, Daley opened up about his personal life. He gathered the courage to speak out about his new relationship with Dustin Lance Black, who is a director and producer saying that it was love at first sight.

The two announced their engagement on October 1 2015. They are still going strong and have recently announced that they are announcing a first child through surrogacy. This news was largely met with love and support for the couple but there were also many hateful useful who used homophobic trolls targeted at the couple.

An advertiser even stopped plans to advertise with the Daily Mail as they released an article that was no in support of the couple’s decision with the writer referring that a child being brought up “by a man and woman” is better. This has sparked fresh controversy but the couple are still staying positive and reacting to these negative comments with “strength and love”.