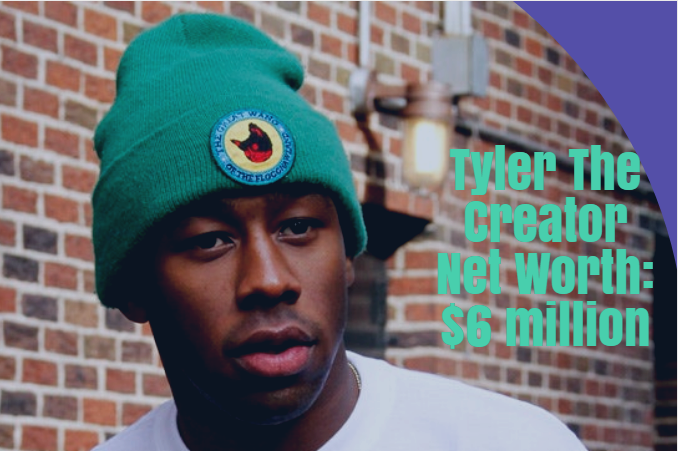 Tyler Gregory Okonma, who is famously known as Tyler, the Creator, is an American rapper, record producer, and music video director.  He has emerged as a top rapper in recent years through the group Odd Future. As his name suggests, he loves creation and is responsible for anything related to artwork for the group.

Here are some interesting facts about Tyler, The Creator:

1. Tyler The Creator net worth is estimated to be $6 million.

Celebrity Net Worth lists Tyler The Creator net worth to be $6 million while Richest lists his net worth to be $4 million. Through the group, they sell merchandise which Tyler himself designs for their clothing company called GolfWang.

These works of art have really attracted many fans towards their brand and the product that they are providing.

He has more than 4.5 million followers on his Instagram page through which he keep his fans alert about his professional career.

He even began an annual music festival called the Camp Flog Gnaw Carnival and even has his own streaming service called GolfMedia.

Tyler The Creator Net Worth compared to other rappers:

2. He attended 12 schools during his childhood.

Tyler was born on March 6, 1991, in Ladera Heights, California. He was born to a Nigerian father who Tyler admits that he has never even met. He grew up primarily in California with his mother.

Without a father, he was raised in a mother dominated family. Tyler shared that in his 12 years of schooling he had attended 12 different schools. He had move around here and there which never helped him have a stable childhood.

But, he still managed to teach himself to play the piano when he was only 14 years old and would design album’s case and create covers at the tender age of 7. Before he was famous, he even worked at FedEx and Starbucks.

Tyler got his start with XL Recordings in 2011 with whom he released his debut album called Goblin. This album would be a great start for him and got the momentum needed to kickstart his career with Odd Future Records.

He became associated with Sony Music Entertainment releasing his second album called “Wolf”. This was a massive hit debuting at number three on the US Billboard 200.  Here, Tyler The Creator would solidify as a name to watch out for in hip-hop with fans seeming to love the vibes he brought in his music.

4. Flower Boy has been the biggest hit of his career.

He released his fourth album in 2017 which was titled as “Flower Boy”. This album has been his breakthrough album into the mainstream of the music industry as it managed to reached the number 1 spot on the US Rap and US R&B/Hip-Hop charts. It also peaked at number 2 on the Billboard 200 chart.

2017 was a great year for Tyler. His own TV show called Nuts+Bolts premiered that created a huge buzz upon his fans. He also had hit songs like “Who Dat Boy” and “911/ Mr.Lonely”.  If it weren’t for Kendrick Lamar’s “DAMN”, Tyler could possibly been the winner of the Album of the Year at the 60th Annual Grammy Awards in 2018.

5. Tyler has been in the midst of controversies for his homophobic slurs and misogynistic lyrics.

Many of his lyrics frequently include words like “faggot” which many believe refer to homophobic groups. He has also used this frequently in his Twitter profile as a normal word which has sparked a lot of controversy about his general views on sexuality.

Tyler says that his fans don’t get offended by this and that at the end its just something that really gets people attention. He has also been criticized for using graphical representations of violence of women and rape in some of his music videos which completely mislead the fans.

One of the biggest controversies that he has been involved in though is a set of commercials that he directed for Mountain Dew. Apparently, it included “racial stereotypes” in the commercial. PepsiCo had to apologize for the ad as it was dubbed as “arguably the most racist commercial in history”.