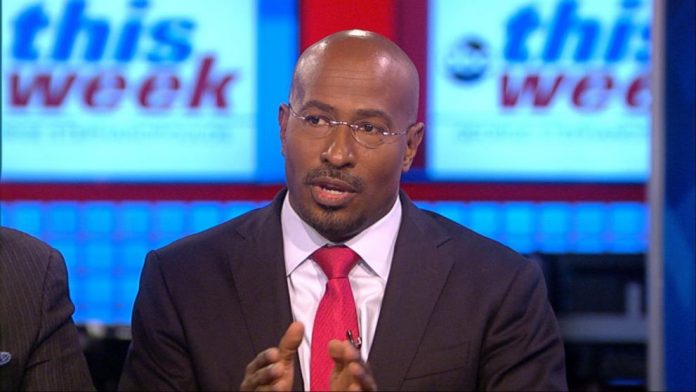 Anthony Kapel Jones, who is simply known as Van Jones, is an American news commentator, author, and social entrepreneur.

He is the author of the best-selling books The Green Collar Economy and Rebuild The Dream. He is also known for his appearance on media during the 2016 Election campaign. He is currently working on “The Van Jones Show” for CNN which debuted on January 27, 2018.

Here are some interesting facts about Van Jones:

1.Van Jones net worth is estimated to be $1.1 million.

As of 2018, Van Jones net worth is around $1.1 million. Jones is financially very sound. Even though his salary and other earnings have not been disclosed, he has become a top contributor for the media and has written best-selling books like The Green Collar Economy. He is also open to bookings for speeches across the country on the different problems faced in today’s society.

He has also been the founder of several social enterprises including The Ella Baker Center for Human Rights, Rebuild the Dream, Color of Change, and Magic Labs Media.

2.His organization The Dream Corps works on America’s toughest problems.

His most well known organization among others has been The Dream Corps where he is the current President. Over the years, with his leadership, the organization has been involved in several initiatives that have been praised worldwide by political leaders.

One of these initiatives was #YesWeCode. The purpose was to help more than 100,000 young women and men from underrepresented backgrounds to find success in the sector of technology. He has also led other successful initiatives including #cut50, Green For All, and #LoveArmy.

3.John F. Kennedy is one of his role model

Jones was born on September 20, 1968, in Jackson, Tennessee, U.S. By this time, the country had to go through periods of great grief with the demise of leaders like John F. Kennedy and Martin Luther King, Jr. He grew up being inspired by the work that they had done for the betterment of society and wanted to follow in their footsteps.

After graduating from Yale Law School, and started his career as a legal observer. He would go on to have tremendous success as a Human Rights and social entrepreneur. Year after year, he launched and implemented campaigns he believed in that led to many changes. By 2005, Jones was starting to promote eco-capitalism and environmental justice. He would go on to establish the nation’s first ever “Green Jobs Corps” in Oakland in 2008.

He went on to serve as President Barack Obama’s Special Advisor for Green Jobs in 2009.Upon his professional advice, the Obama Administration managed more than $500 million in national funding for green jobs training. The term “green jobs” itself was not termed till that time.

4.He is a regular contributor for CNN

He has high hopes from his recently launched “The Van Jones Show”. According to its description, it will feature cultural and political leaders as well as raise the voice of the ordinary people all around the country. Jones, who was previously associated with CNN for the show “The Messy truth” also has plans to run a series titled “The Redemption Project” in the near future.

His current show is only going to air two times every month with him reliant on putting the context into the people’s minds. He believes that today there is an abundance of data but a large deficit of wisdom. The show is going to help cover the latter part immensely.

5.Jones is the recipient of several accolades

Jones has an impressive collection of awards for his contributions to society. He was given the title of “Young Global Leader” by World Economic Forum in 2005. He was one of Time Magazine’s 2009 “100 Most Influential People in The World” and on Fast Company’s 12 Most Creative Minds on Earth.

He is also the recipient of the NAACP’s Image Award, One of The Root’s 100 Honorees for 2014, David E. Glover Vanguard Award, and Webby Special Achievement Award among many more. Jones is a true leader and an inspiration to the new generation of like-minded individuals who aspire to bring positive change to society.

factsfive - February 15, 2018
Brynn Cameron Wiki Brynn Cameron is the ex-girlfriend of NBA star Blake Griffin. Recently, she is in the news after she claimed that Blake is...

Tim Curry Wiki, Bio, Age, Net Worth, and Other Facts

Jessica Lange Wiki, Bio, Age, Net Worth, and Other Facts

Ann-Margret Wiki, Bio, Age, Net Worth, and Other Facts

Khleo Thomas Wiki, Bio, Age, Net Worth, and Other Facts

Elsa Jean Wiki, Bio, Age, Net Worth, and Other Facts