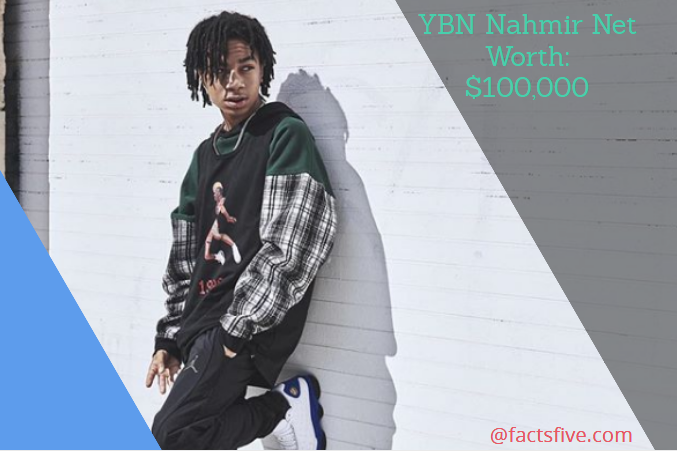 YBN Nahmir is an emerging American rapper representing Birmingham, Alabama. He suddenly raised ripples around the music industry out of no where after releasing his single titled “Rubbin Off the Paint” that went on to peak at number 46 on the Billboard Hot 100 charts.

He has already garnered over 1 million followers at such a tender age of 18. His success showcases the power of the internet and the great potential and opportunities that the younger generation of artists have today that might not have been present 20 years ago.

Here are some interesting facts about the young rapper:

As of 2018, YBN Nahmir net worth is estimated to be around $250K. The young rapper has garnered a lot of attention in media outlets and social media outlets for his work. But, he has not fully reached the monetization part for his music. He has mentioned that he has over 50 singles that are yet to be released at all.

This showcases that many commercially beneficial projects are on the way for him, which is sure to elevate his net worth tremendously in the coming few years.

YBN Nahmir Net Worth compared to other rappers:

His real name is Nick Simmons. Simmons was born on December 18, 1999 in Birmingham, Alabama. He was raised by his mother and grew up with his cousins who would persuade and influence him into criminal activities.

Simmons was studying in Clay-Chalkville High School but the instant rise he received through his single was so overwhelming and motivating for his hip-hop career that he decided to withdraw from the program. Since then he has gone to take online classes which he is falling behind on due to mixed schedule but he does intend to graduate.

3.His music interest actually started when he started to play the game “Rock Band”

Nahmir was an avid gamer. Looking at his passion for it, he was gifted a Xbox 360 for Christmas when he was only 14 years of age. He would fall in love with the game called Rock Band. He spent most of his time as a teenager with his Xbox console developing a community among like-minded gamers.

He actually developed a reputation in his Xbox community for his freestyle raps and even garnered a following on Youtube for doing the same while displaying Grand Theft Auto 5 gameplay. He even mentions how he spent most of his time online with gamer friends based in California.

4.The song “Rubbin Off the Paint” was made in a very tight budget

He actually started recording at home with a Blue Snowball mic and Mixcraft 8. 5. The song “Rubbin Off the Paint” was made in a very tight budget from his own home. Even Nahmir was amazed at how it was blowing up online so exponentially for a moment he couldn’t believe it.

The rapper has mentioned that there was no mainstream rapper in Birmingham to follow the footsteps of. That is why Nahmir was heavily influenced by San Francisco Bay area rappers including E-40 who’s tones do come in some of his work. As a kid growing up, he also listened to the songs of artists like Easy-E and Tupac.

5.He wants to move his family out of Birmingham

Nahmir and his family are from Birmingham which is not the brightest and safest of places to be living in. He acknowledges the environment present there and has mentioned that his ultimate goal as of this time is to make sure to get his family out of the city to one that is better and safer.

He intends to make enough money so that he can support his cousin who recently got out of jail.

In the online community, he established YBN, which is a collective standing for Young Boss Niggas. Even though there are many labels that are interested in signing the young rapper, he may even choose to go all alone with a concept that is unique to himself. If the YBN base is strong enough, he may opt to create his works from there but it seems that Nahmir is full of options at this point in his life.