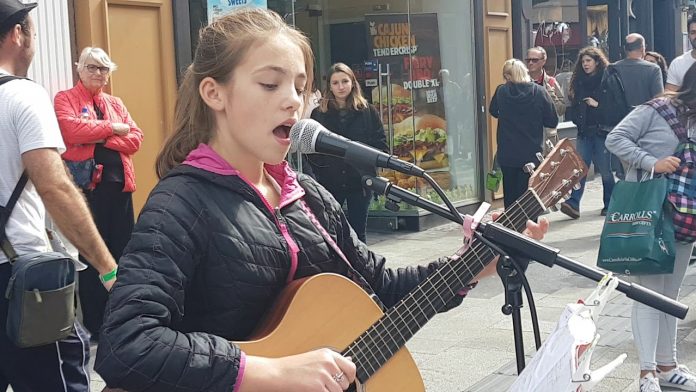 Allie Sherlock is an Irish singer, guitarist and YouTube star who rose to fame covering popular songs from artists like Ed Sheeran, Adele and Shawn Mendes on her self-titled YouTube channel.

Allie was born on April 7, 2005 in Cork, Ireland to Mark Sherlock. She first started playing guitar in 2015 and then started her YouTube channel the following year. She became viral on social media platforms like YouTube and Twitter after many passersby uploaded the video singing a song on social sites. She performs regularly around places like Cork, Dublin, Galway and Limerick. Her popularity then rose to new level after several media outlets like Independent.ie, Dailyedge.ie, evoke.ie, her.ie and many other sites shared her story.

Allie started uploading videos on YouTube since 2016. One of her most popular video titled “Ed Sheeran Supermarket flowers cover” has received more than 5 million views in just 7 months. She is quiet popular on social media sites. Her YouTube channel has over 273K subscribers, Instagram account has over 160K followers and facebook page has over 80K likes.

She turned an opportunity to be on The Ellen DeGeneres Show.

Allie reportedly turned down an offer to be on Ellen DeGeneres show in 2017. Her father Mark Sherlock told that she turned down the request to appear on the show because she wanted to enjoy her music without any pressure.

But one year later on January 30, 2018 Allie finally appeared on The Ellen Degeneres Show. Ellen welcomed 12 year old singer saying “When I saw a video of our next guest singing on the streets of Dublin I knew I had to meet her. From Cork, Ireland, please welcome 12-year old Allie Sherlock”.

She performed a “Million Years Ago” song by Adele and even got a standing ovation. Allie is also referred as the next adele by some people.

Allie also revealed that she is working with Ryan Tedder from One Republic and Charlie Puth on her new music. The future is very bright for a 12 year old singer.