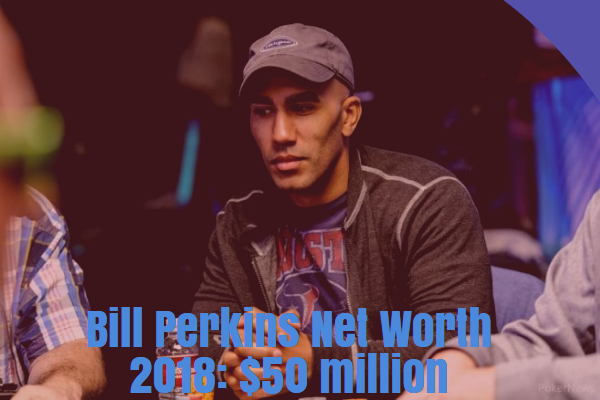 William O. Perkins III also known as Bill Perkins is an American hedge fund manager, film producer and amateur poker player from Texas. As of 2018, Bill Perkins net worth is estimated to be massive $50 million.

Born on 1969, Perkins grew up in New Jersey and graduated from St. Peter’s Preparatory School in 1986. After completing school, he attended University of Iowa to pursue further study in Electrical and Electronics Engineering. After that, he worked under oil trader, John D. Arnold for many years before starting his own hedge fund.

Perkins’ understanding of venture capital and energy markets has made him extremely successful what he is today. In 1997, he founded Small Ventures USA, L.P and then later joined Centaurus Energy in 2002. He was also the CEO of Cutuco Energy Central America. In 2008, he had the opportunity of trading Goldman Sachs from where he managed to make $1.25 million.

Bill Perkins is a very talented guy. In 2009, he became involved in film production. He produced movies like After Life, Unthinkable and Cat Run. Apart from hedge funding and producing movies, he is also known to be a famous Poker player.

He has mastered the game and has entered multiple events like World Series of Poker Big One for One Drop, Poker Stars Big Game, Poker Stars Caribbean Adventure and Poker Night on Wall Street. His total tournament winnings in the year 2015, was about $2,500,000 out of which $1,965,163 was from One Drop cash at WSOP.

He is also friendly guy and likes to enjoy hanging out with friends on a trip. He is good friend with Dan Bilzerian and they are often seen together partying and hanging out with each other.

Bill Perkins net worth of massive $50 million comes from his major participation in Poker events like World Series, Poker Stars Big Game and many more. He also earns significant amount of money from hedge fund.