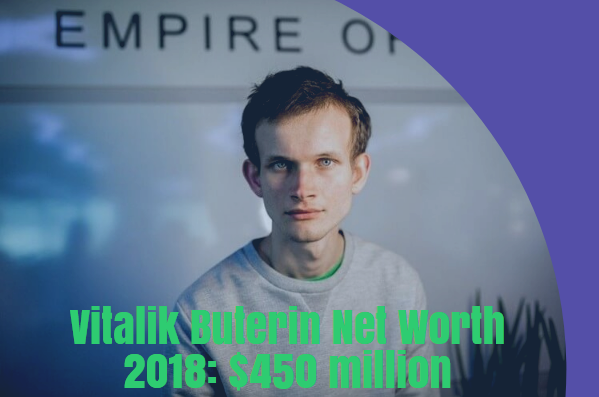 Vitalik Buterin is the genius behind the world’s second most valuable cryptocurrency today called Ethereum.

The crypto-currency blew up in 2017 with his vision of a decentralized based system closer than even to becoming a reality with a valuation today of more than $100 billion market cap. Just a couple of years ago, its market cap was only $1 billion.

Here are some interesting facts about the co-founder of Ethereum:

1.Vitalik Buterin net worth is estimated to be minimum of $450 million

As of 2018, Vitalik Buterin net worth is estimated to be $450 million but that may fluctuate any time soon. Buterin is only 24 years old and is already a multi-millionaire. The day that his net worth might not be far away considering the rate of growth that Ethereum has had since the boom of cryptocurrency.

In an interview with Forbes, Buterin stated that he owns less than 0.4% of Ethereum as of today. But with a $100 billion market cap, his net worth is a staggering $400 million and this is only a conservative estimate. With people and financial institutions starting to accept cryptocurrencies, it seems that Buterin’s net worth might multiply multiple folds in a short number of years.

The software developer was born on January 31, 1994, in Kolomna of Russia. But after living there for six years, his parents moved to Canada in search of a better life.

From a young age, Buterin became passionate on subjects like mathematics and programming that were crucial in his future creation of Ethereum. He was lucky to have attended a private school named Abelard School which he even praised for providing a solid education for him.

3.He dropped out of University

Buterin was very talented in core concepts relating to Mathematics and the economic chain around the globe. He was very passionate about code and the future that layed ahead for its new mode of applications.

He was a student at the University of Waterloo but eventually decided to drop out in 2014 following a great opportunity he received as the Thiel Fellowship. The award for it was $100,000 and was enough to solidify his decision

One of the prime examples which shows that Buterin is a visionary is in the fact that he was writing articles about Bitcoin and cryptocurrency back in 2011 when most people didn’t even realize what it was.

He used to work on a bitcoin blog but eventually developed a new publication called Bitcoin Magazine where he was the lead writer. He consistently wrote for the publication for years until it was caught out by BTC Media. Buterin is also the co-author of the book called “The Business Blockchain: Promise, Practice, and Application of the Next Internet Technology”

He has been featured in the Forbes 30 under 30 list in 2018 under the finance category. He has also been featured in Fortune’s 40 under 40 list for 2 years and might be selected this year as well.

5.His travels after dropping out inspired Etheruem

Buterin, who first heard of Bitcoin when he was only 17 years of age recognized the applications that it had in real life. He prepared a white paper for Ethereum where he proposed for an open source platform that were very unique and had better applications than Bitcoin did. Today, Ethereum is the second most popular cryptocurrency and is starting to get worldwide acceptance. Big corporations like Microsoft, BP, and JPMorgan Chase have already declared a partnership with it.

The system works in a single blockchain. He feels that such a technology is definitely the future and has a wide array of applications that people have not come to realize fully yet.

Buterin is still very young but he looks to be on a great mission, One which he wants to see till the end for a better world around us with more equality and efficiency in the services that we provide. Its worldwide acceptance and use as a normality may not be too far away either with many businesses being set up in its early stages that use such a blockchain application.

factsfive - February 6, 2018
News emerged that Lululemon Athletica. CEO Laurent Potdevin resigned because of behavior that fell short of the company's standard. So, who is Laurent Potdevin...

Sheryl Berkoff Wiki, Bio, Age, Net Worth, and Other Facts

Gaten Matarazzo Wiki, Bio, Age, Net Worth, and Other Facts