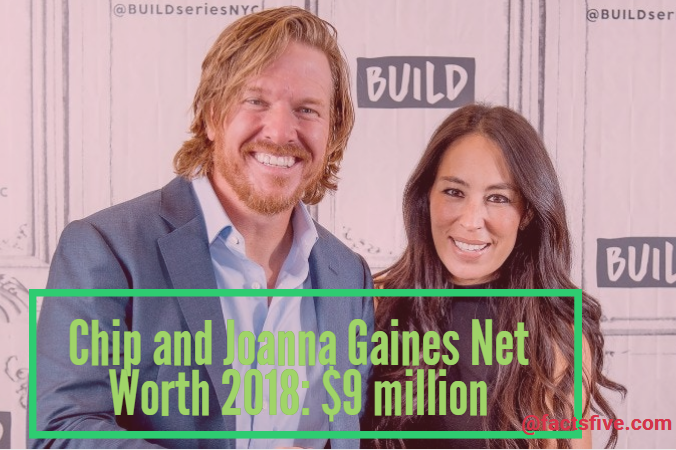 Joanna is also a businesswoman who is the owner, founder and lead designer of the company named Magnolia Homes. They worked in the Baylor real estate market and the couple runs their business Magnolia Homes.

Here are some fact about Chip and Joanna Gaines :

1. Chip and Joanna Gaines net worth is estimated to be $9 million.

As of 2018, Chip and Joanna Gaines net worth is around $9 million. Looking at their background reality show is not only their source of income. Somehow it is one of it as they get some good amount of money per episode but they do not fully rely on Fixer Upper.

Chip and Joanna Gaines have gained their fame in the field of their own business as well. They get some profit from their company Magnolia Homes where they design the new homes. Fixer upper is also the show which renovates the homes which are in poor condition. So, Fixer Upper had helped them to connect their business. They are also author of Book The Magnolia story where they had shared their love, twist and turns of their life. The book is also one of the source of their income.

2. Chip and Joanna Gaines studied at Baylor University but never met each other. How did they meet?

Chip went to the shop named automotive shop which Joanna’s father own to fix his brakes. Janna’s father had tied family photo in the shop where Chip saw Joanna for the first time in the picture and decided she is the one.Later, they met when Joanna was working there.

3. Joanna always dreamed to be in television.

Beautiful Joanna had dreamed to be in television since very longtime. She wanted to be a broadcast journalist. In her leisure time, she worked as an intern with CBS news in New York. Her interest was in home design and home boutiques.

Lucky, not as a journalist but as a host she got chance to be on television with her interest In home designs.

Handsome Chip’s dream is to play baseball pro. Since childhood Chip played baseball and later he went on to play baseball for Northlake college in Irving,  Texas, for a year. After that, he was transferred to Baylor University but unfortunately couldn’t make the Baylor team.

Now, he is the famous host, the businessman with great energy but still deep inside heart she misses baseball and wanted to fulfill his dream. Let’s hope in coming days he would be able to play baseball and complete his dream.

5. Chip and Joanna parents of four but expecting fifth one.

Chip and Joanna are parents of four beautiful kids. They are lovely four kids with whom they can live happily. They have two daughters Emmie and Ella and two sons Drake and Duke.

They are not done with their four kids. The romantic couples are expecting another fifth one. They are expecting new baby in July 2018.

Henry Cavill Wiki, Bio, Age, Net Worth, and Other Facts

factsfive - October 20, 2020
Henry William Dalgliesh Cavill was born on the Bailiwick of Jersey, a British Crown dependency in the Channel Islands. His mother, Marianne (Dalgliesh), a...

Nicole Appleton Net Worth: 5 Facts You Should Know

Fairuza Balk Wiki, Bio, Age, Net Worth, and Other Facts