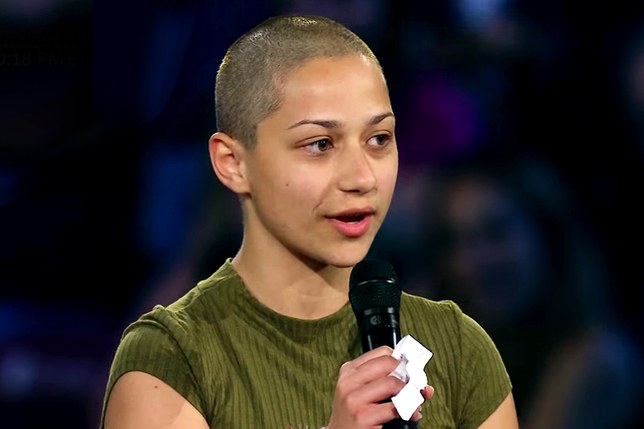 Emma Gonzalez is an American activist and advocate for gun control. She is known to the world as one of the survivor of Stoneman Douglas High School shooting. She rose to fame after she gave a speech at a rally against gun violence.

Gonzalez was born on 1999/2000 in Parkland, Florida to Jose Gonzalez. Her father is a cyber-security attorney while her mother is a math tutor. They immigrated from Cuba to New York City in 1968. She also has two older siblings.

Currently, she is the student of Marjory Stoneman Douglas High School and she is expected to graduate from the school in the spring of 2018. She is also an activist and advocate against gun violence. She has co-founded the group named “Never Again MSD” which is a gun-control advocacy group.

When the shooting happened at the school, she was in the auditorium with dozens of other students when the fire alarm went off. She attempted to exit through the hallway but instead took cover as instructed by police. She was held there for two hours until police let students out.

After that terrible incident, she gave an 11 minute speech in front of the Broward County Courthouse at a gun control rally in Florida. In the speech, she pressured government to change the law regarding gun issue. In a town hall show hosted by CNN, she also criticized National Rifle Association as well as politicians who accept money from it saying “you’re either funding the killers or you’re standing with the children”.

Her powerful response caught the attention of several people all over the world and her speech was trending on several social media sites. In the span of 10 days, her Twitter account gathered more than 1 million followers. In an interview on 60 Minutes, she said that arming teachers in classrooms with guns is stupid. In March 2018, she appeared on the cover of TIME magazine along with her friends.

factsfive - February 16, 2018
Hope Charlotte Hick is the White House Communications Director for President Donald Trump. She is known as Trump’s longest serving political aide with the...

Nicole Appleton Net Worth: 5 Facts You Should Know

Lisa Marie Presley Net Worth: 5 Facts You Should Know

Rooster McConaughey Net Worth & Wiki: 5 Facts About Him