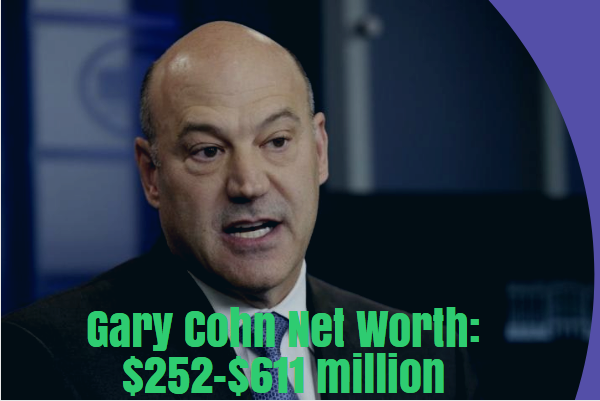 Gary Cohn is an American investment banker who served as the Director of the National Economic Council and also as a chief advisor to President Donald Trump.

Here are some of the interesting facts about Gary Cohn

Gary Cohn net worth (precise) is not available to us. According to New York Times story from March of 2017, says that his net worth lies in between $252 million to $611 million.

Gary Cohn worked at Goldman Sachs as a second in command from 2009 to 2016. According to several sources, his salary was $22 million in 2014 and $21 million in 2015. He also received a severance package worth around $285 million which included a combination of stock payments and access to cash. During his time at White House he received salary of $30,000 which is considered very less than other high ranking member. Still Gary Cohn was considered one of the richest members in Trump administration.

2. His Early Life and Education

Gary Cohn was born on August 27, 1960 to Victor and Ellen Cohn. He was born in Cleveland, Ohio but was raised in Shaker Heights, Ohio. At a very young age, he was diagnosed with dyslexia and went to four schools by the time he reached sixth grade.

He studied at Gilmour Academy and then American University’s Kogod School of Business from 1979 to 1982. He then graduated with a degree in Bachelor of Science in Business Administration with a major in Finance, Real Estate and Urban Development.

4. Position/Resignation at the White House.

On January 20, 2017 Gary Cohn took the position as Director of the National Economic Council in Donald Trump’s administration. He was called “economic-policy powerhouse” and “Globalist Gary” by several media outlets. One of his accomplishments was backing the tax overhaul that was passed in December 2017. The tax bill is expected to cut taxes by $1.5 trillion.

On March 6, 2018 Gary Cohn resigned from the position as Director of National Economic Council following Trumo’s plan to impose 25% tariff on steel imports and 10% tariff on aluminum imports.

Trump thanked Gary for his work saying: ” Gary has been my chief economic adviser and did a superb job in driving our agenda, helping to deliver historic tax cuts and reforms and unleashing the American economy once again, He is a rare talent, and I thank him for his dedicated service to the American people.”

Meanwhile Cohn confirmed his departure saying: “It has been an honor to serve my country and enact pro-growth economic policies to benefit the American people, in particular the passage of historic tax reform, I am grateful to the President for giving me this opportunity and wish him and the Administration great success in the future.”

5. He is married to Lisa Pevaroff Cohn and has three children.

Gary is married to Lisa Pevaroff Cohn. Professionally, she is an artist and expresses her talent through painting, jewelry or collage. Lisa and Gary together have three children.

factsfive - November 5, 2020
Humanitarian and actor Richard Gere was born on August 31, 1949, in Philadelphia, the second of five children of Doris Ann (Tiffany), a homemaker,...

Jacob Tremblay Wiki, Bio, Age, Net Worth, and Other Facts

Anna Camp Wiki, Bio, Age, Net Worth, and Other Facts

Regina King Wiki, Bio, Age, Net Worth, and Other Facts

Shawn Ashmore Wiki, Bio, Age, Net Worth, and Other Facts