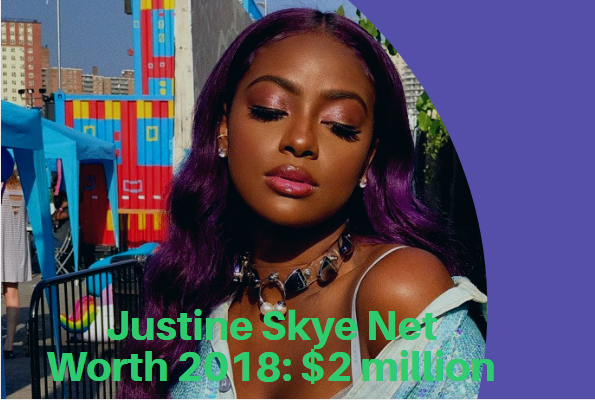 Justine Skye is an American singer, songwriter, actress and model. Today, Skye has become a prominent singer with her releasing her debut album called Ultraviolet recently in 2018.

She is also a social media influencer with over 1.2 million followers on her Instagram and is known for her group of popular friends that regularly feature in her posts.

Here are some interesting facts about Justine Skye:

1. Justine Skye net worth is estimated to be $2 million

As of 2018, Justine Skye net worth is estimated to be around $2 million. The singer has made her name through her singing attributes. She has become very popular among teens across the U.S. and regularly does endorsements and sponsorships of top brands and companies in her large fan following based social media platforms.

Skye regularly does paid performances all across the U.S. and has also appeared on Tour of some artists with collaborations. She has also modeled for several brands including Kylie Jenner’s new make-up range for darker tones. Her album Ultraviolet has been very successful and she is planning on a grand tour as well. Currently, she is fully promoting the album and performing at different venues in the U.S.

She was born Justine Indira Skyers on August 24, 1995 in Fort Greene, Brooklyn, New York.  Justine was a passionate singer from a young age and utilized every opportunity she got to perform her talents. Her mother Nova Pery is a music attorney due to which Justine definitely got more exposure towards this field of work at a young age.

She would take many singing lessons and eventually move towards songwriting a well. During the early stages of her career, she worked with professionals of the industry like August Rigo and Eric Hudson who mentored her to get started.

Through their help and mentorship, she even went on to release an Extended Play titled “Everyday Living” in 2013. This EP was impressive to many labels and eventually Atlantic Records became associated with her.

amfAR was beautiful. @theoriginalbigdaddy’s speech was the most honest thing I’ve heard in my life, thank you.

She was discovered by users and appreciated because of the regular posts relating to fashion. Her purple hair topped up with changing unique style attracted a lot of female followers for her. Eventually, she started to share her singing abilities with her fans that made them love her even more.

To the public audience, one of the first impressions she was able to make was from the cover of rapper Drake called “Headlines”. The cover posted on YouTube ended up having more than 2 million views in a quick span of time and elevated her will to produce more music.

After the success of her mixtapes and Extended Plays, Skye has given her fans a debut album titled “Ultraviolet”. There has been a great deal of buzz surrounding the album with her fans claiming that the album needs a lot more exposure because it is really good.

Some of the best songs in the album include U Don’t Know, Back for More’ and Don’t Think About it. She is very active with her fans and has shown appreciation for their support as well.

5. She sparked controversy and criticisms all across social media in 2017.

This was because whilst performing the National Anthem before a Brooklyn Nets game at the Barclays Arena, she decided to kneel in one of the segments of her performance. This occurred during the time when NFL was facing a lot of heat over such actions with her taking one side. Definitely her fans and followers on the other side were not very happy with this that resulted in a lot of negativity for her.

Recently, she has been talked about a lot since Kylie Jenner’s announcement of the birth of her new child named Stormi. Jenner had the baby with boyfriend Travis Scott who reportedly dated Justine back in 2015. Even though in her previous interviews, she doesn’t clarify that they are in a relationship but is full of praises for him.

Kylie and Justine were very close friends they were regularly spotted together in different events. But since last year, they have hardly been together. Justine doesn’t even follow Kylie on Instagram anymore. This raised questions among curious fans if Kylie and Travis Scott’s current relationship together could be the main reason for their separation as friends.