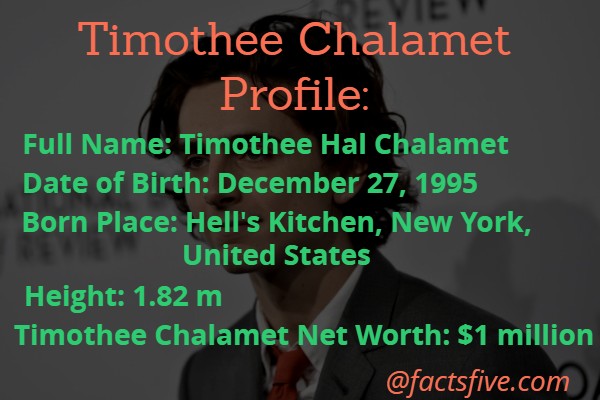 1.Timothee Chalamet Net Worth is estimated to be $1 million

Timothee Chalamet Net Worth as of January 2018 is listed to be around $1 million. While the actor started his acting career in 2008 appearing in short movies, he got his major breakthrough landing a role in movies like Interstellar, Call Me by Your Name and Hot Summer Nights. His fortune was about to rise in 2018 by appearing in Woody Allen movie “A Rainy Day in New York” but after news emerged that Woody Allen sexually abused her adopted daughter Dylan Farrow, Chalamet decided to donate salary from that movie to three charities: Time’s Up, RAINN and the L.G.B.T. Center. In an interview, he said:

“I have been asked in a few recent interviews about my decision to work on a film with Woody Allen last summer. I’m not able to answer the question directly because of contractual obligations. But what I can say is this: I don’t want to profit from my work on the film, and to that end, I am going to donate my entire salary to three charities: Time’s Up, the LGBT Centre in New York, and Rainn”

2.His Early Life, Family and Education

Timothee Chalamet was born on December 27, 1995 in Manhattan, New York to Nicole Flender and Marc Chalamet. His father Marc Chalamet is an editor for UNICEF while his mother Nicole is a real estate broker and former Broadway dancer. He has an older sister named Pauline who is also an actress and lives in France.

Chalamet got knowledge on acting from Fiorello H. LaGuardia High School of Music & Art and Performing Arts. After he graduated from school in 2013, he went to Columbia University and then to NYU Gallatin School of Individualized Study in order to pursue his acting career to higher level.

two new shots by @ryanpfluger for this weekend’s @nytimes #callmebyyourname ?

Chalamet started his acting career in 2008 appearing in several commercials and short films. In 2011, he made Off-Broadway debut in play “The Talls”. After that he went on to play in short roles in TV series like Law & Order, Loving Leah, Royal Pains, Homeland and Trooper. 2014 was a great year for Timothee Chalamet as he landed roles in movies like “Men, Women & Children”, “Interstellar” and “Worst Enemies”. Shortly, thereafter he appeared in movies like “One and Two”, “The Adderall Diaries”, “Love The Coopers” and “Miss Stevens”.

However, in 2017 he landed one of his best acting so far. He appeared in a movie “Call Me By Your Name” alongside Armie Hammer. His role was widely praised by critics and even New York Times featured Chalamet in their listing of the ten best actors of the year. The same year, he also appeared in another top movie Lady Bird directed by Greta Gerwig. In 2018, he will be playing in Woody Allen movie “A Rainy Day in New York” along with Selena Gomez.

4.He has won several accolades already.

He may be only 22 years old, but he has won several major awards already thanks to his role of Elio Perlman in movie “Call Me by Your Name”. For his role Elio Perlman, he has won

For those who don’t know who Lourdes Leon is, she is in-fact daughter of legendary singer Madonna. The duo started their affair while they were both at LaGuardia High School of Music & Art and Performing Arts in New York. According to whosdatedwho, Timothee Chalamet and Lourdes Leon started their relationship in March 2013 and they dated for only one year eventually breaking up in March of 2014. According to the same website, both Timothee Chalamet and Lourdes Leon are currently single.

James Woods Wiki, Bio, Age, Net Worth, and Other Facts

Felicity Jones Wiki, Bio, Age, Net Worth, and Other Facts

Isabel May Wiki, Bio, Age, Net Worth, and Other Facts

Kieran Culkin Wiki, Bio, Age, Net Worth, and Other Facts

Emilia Clarke Wiki, Bio, Age, Net Worth, and Other Facts

Adrianne Palicki Wiki, Bio, Age, Net Worth, and Other Facts