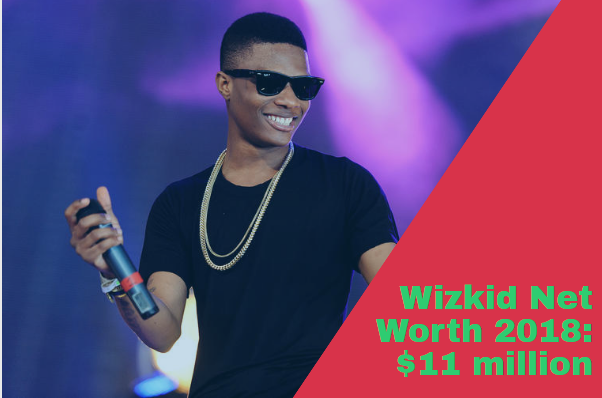 Wizkid is a Nigerian singer and songwriter. The singer is one of the prominent artists of Africa and has even been given the name of the Justin Bieber of Africa by some of his fans.

The artist has had several successful songs in the last couple of years with his recent hit coming in his collaboration with Drake on the viral sensation “One Dance” which eventually charted number one on the Billboard Hot 100 chart.

Here are some interesting facts about WizKid:

1. Wizkid has an estimated net worth of $11 million

As of 2018, Wizkid net worth is $11 million. His high net worth is justified by his hit albums and singles that he has produced over the years. He has toured worldwide across all the major cities around the world. One of his earliest grand tour was for the compilation album Empire Mates State of Mind. He has also been associated with Guinness for concerts around different parts of the world.

In 2013, he was on Forbes’ list of the Top 10 Richest African Artists coming in the fifth position. Today he is even more bankable than ever before.

He has signed some lucrative deals in the past. He had an endorsement deal with Pepsi worth $350,000 for one yea. Pepsi went on to sign him for two more years because of the engagement that he brought for the brand all across Africa. He has also been associated with telecom giants like MTN Group and Globacom(GLO) on multi-million dollar endorsement deals separately.

Wizkid lives a lavish lifestyle which he frequently showcases in his social media accounts. His Instagram account alone boasts more than 4.6 million followers.

He was born on July 16, 1990 in Surulere, Lagos. He was interested in a career in music from a young age and was even mentored by Naeto C when he was only 15 years old. He still had some complications as he was studying in Lagos State University but later dropped out to focus fully on his musical career.

Wizkid who grew up listening to artists like Fela Kuti and Bob Marley, had actually adopted the stage name Lil Prinz. This name would last until 2006. Later he would sign with Empire Mates Entertainment in 2009.

3. His debut studio album was “Superstar”

He began to work hard on his debut album “Superstar” that would have hit singles like “Holla At Yor Boy” and “Don’t Dull”. Eventually after two years of work on it, the album was released in 2011. This helped Wizkid develop his name and for a fan base.

It was nominated for several awards as well. He has gone on to release Ayo, his second studio album that was a bigger success and featured highly rated artists like Tyga, Akon, Wale, and Rihanna. Most recently, he released his Extended Play called Sounds from the Other Side.

4. Wizkid has his own record label called “Starboy”

Even though the artist himself is still very young, he founded the music record label “Starboy” back in 2013. After things turned sour with the label that he was previously signed to and especially the boss, Banky W.

This motivated Wizkid to become the current Chairman of the label which is currently thriving and booking major artists across Africa and expanding worldwide.

5. He has his own official jersey called “Wizkid FC”

One of the richest and most popular artists in Africa, it seems that the top brands are chasing to get his signature. He has most recently partnered with sport wear brand Nike to unveil his own official jersey for Starboy.

He was selected by Nike for their jersey campaign where stars have access of customizing the jerseys especially meant for their fans. His fan base in Africa is ecstatic with this recent campaign and seem to be loving it showing their support for him on Twitter.

He is high on demand when it comes to promotions and recently even teamed up with Nigerian footballer Alex Iwobi to unveil the jersey kit for the Nigerian team for their World Cup journey for 2019.

Chris Hemsworth Wiki, Bio, Age, Net Worth, and Other Facts

factsfive - November 10, 2020
Chris Hemsworth was born in Melbourne, Australia, to Leonie (van Os), a teacher of English, and Craig Hemsworth, a social-services counselor. His brothers are...

Nicholas Hoult Wiki, Bio, Age, Net Worth, and Other Facts

Krysten Ritter Wiki, Bio, Age, Net Worth, and Other Facts

Ewan McGregor Wiki, Bio, Age, Net Worth, and Other Facts