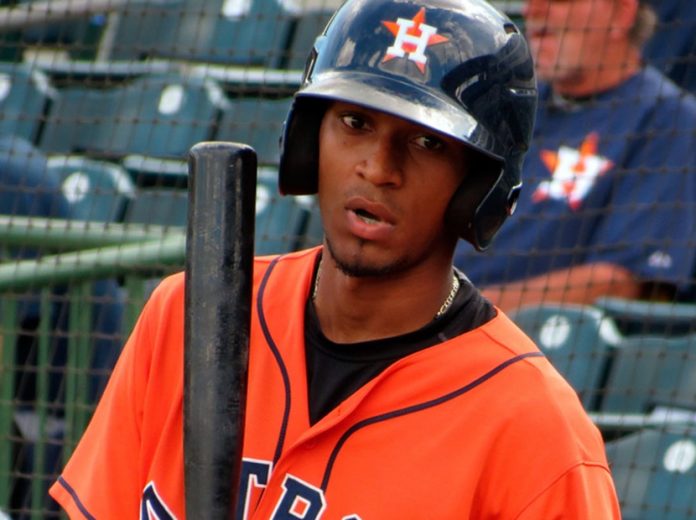 Danry Josue Vasquez Blanco also known as Danry Vasquez is a Venezuelan professional baseball player who is a free agent. As of 2018, Danry Vasquez net worth is estimated to be $1 million.

Born on January 8, 1994 in Venezuela, Vasquez was signed as International free agent by Detroit Tigers in 2010 on $1.2 million signing bonus. He then played 2012 season with West Michigan Whitecaps of Class A Midwest League but he was demoted to Connecticut Tigers of Class A-Short Season New York-Penn League.

He played with West Michigan in 2013 where he had .281 batting average with five home runs and 39 runs batted in. The same year, Tigers traded Vasquez to Houston Astros for Jose Veras. Astros signed Vasquez to the Quad Cities River Bandits of the Midwest League. Next year, he played for Lancaster JetHawks of the Class A-Advanced California League.

While playing for Corpus Christi Hooks of the Class AA Texas League, Vasquez was arrested on suspicion of family violence after video camera caught him hitting his girlfriend. The Astros released Vasquez and his domestic violence charge was dismissed by prosecutors after Vasquez paid a fine and took classes.

Vasquez then signed with Lancaster Barnstromers of the Atlantic League of Professional Baseball for 2018 season. Recently, video footage of Vasquez attacking his girlfriend was released and the Venezuelan national has been released by his current team.

Rachel DeMita Wiki, Height, Net Worth & Other Facts To Know

factsfive - February 5, 2018
Rachel DeMita Wiki Rachel DeMita is an American TV personality who rose to fame after hosting and producing the first ever broadcast show in gaming...

Paige Spara Wiki, Bio, Age, Net Worth, and Other Facts

Tyler The Creator Net Worth: 5 Facts You Should Know

Zoey Deutch Wiki, Bio, Age, Net Worth, and Other Facts