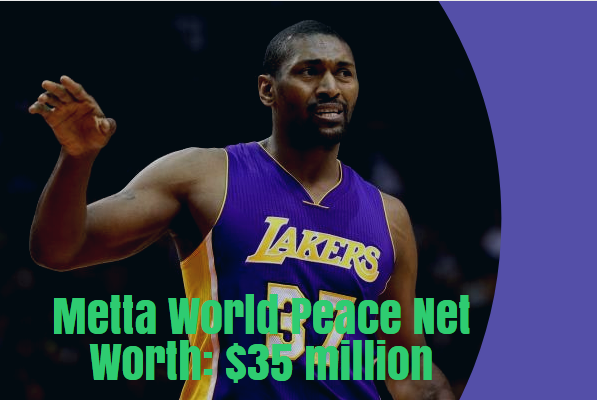 Metta World Peace is an American basketball player turned coach. He has previously played for some of the top NBA teams including the Los Angeles Lakers who he helped win the championship in 2010.

He is currently associated with LA Lakers as a coach for its development team called South Bay Lakers in the NBA G League. Most recently he has been part of the hit reality show called Celebrity Big Brother.

Here are some interesting facts about Metta World Peace:

1.Metta World Peace Net Worth is estimated to be $35 million

As of 2018, Metta World Peace Net Worth is estimated to be $35 million. He has acquired the majority of his wealth through the lucrative deals that he has signed with NBA teams for his services. He was the 16th overall pick in the first round of the 1999 NBA Draft where he signed his first contract with the Chicago Bulls worth $5.4 million for a span of 4 years.

He then went on to sign a massive $40 million deal with the Indiana Pacers. Metta played for many top teams in the years after for similar deals all in the millions. He has gone on to have productive periods of time with the Los Angeles Lakers with whom he spent 4 years and won a NBA championship with. He came back to the Lakers in 2015 signing a two year deal with the purpose of a mentor-like role.

During his prime years, he also endorsed top brands including k1x and BALL’N sneakers. Currently, Metta is associated with the Metta World Peace Basketball Camp for 2018 which has showed his dedication and transition as a coach for the youth. Looking at the role that he has been given by the LA Lakers, Metta has been preparing accordingly recently.

Metta world peace net worth compared to other players:

2.He faced many controversies in the early stages of his career

Metta has also been criticized at times during his career for some of his comments and notorious actions. Most of these controversies were sparked in the rookie yeas of his career. He has been suspended for destroying a TV camera, and had a confrontation with Pat Riley who was a coach of Miami Heat.

He was heavily criticized in 2006 after he reportedly asked then Pacers coach Rick Carlisle for a one month break during the season. Metta had been busy promoting his R & B album titled My World alon with the group Allure. Eventually, he was suspended by the coach.

Metta has several accolades to his name during his time at the NBA as a player. His career highlight has definitely been winning the NBA championship in 2010 but he has also been part of the NBA All-Star team back in 2004.

That same year, he was the NBA Defensive Player of the Year. He is also the recipient of two honorary awards including the Haggerty Award and the J. Walter Kennedy Citizenship Award.

Metta was born with the name Ronald William Artest Jr. He was previously known in media and by fans as Ron Artest but on September 16, 2011, he legally changed his name to Metta World Peace.

This was perceived as a weird decision by many of his followers but he later clarified this decision by saying that changing his name was a way for him to inspire and bring youth together all around the world. His first name Metta is a traditional Buddhist word signifying kindness and friendliness.

5.He auctioned his NBA Championship ring for $100,000 in donations

Metta had witnessed a murder live in front of his eyes in 1991. This was a time when Metta was rookie and just starting out in his professional basketball career.He saw a basketball player, Lloyd Newton sadly stabbed and killed on the basketball court.

This was a horrendous experience for Metta which changed many perspectives about life for him. He donated more than $100,000 combined for charities named Steinway Child and Family services as well as The Child Center of New York for children who are growing up with setbacks and see them live a better life. Metta is a big advocate for mental health problems and has contributed immensely from his side for improving its situation in the U.S.