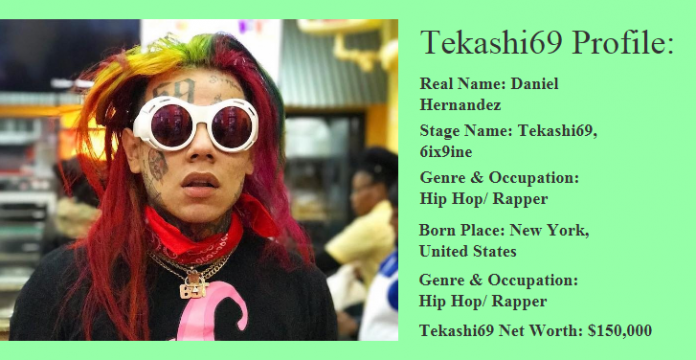 Controversial rapper, Tekashi69 is a new to a rap industry but is trying to make his name big in the rap world. Tekashi69 net worth is exactly unknown to us but some websites like famousbirthsdeaths and ecelebmag estimated his net worth to be in the range of $100,000 to $150,000.

If you want to know more about him check out his some facts.

Tekashi69 was born as Daniel Hernandez on May 8, 1996. He was born in Bushwick, Brooklyn. His father is of Puerto Rican descent while his mother is of Mexican descent. Daniel had a very painful childhood life; His father was murdered when he was 13 years old while he stopped going to school in 8th grade and was expelled. To carry on his life, he worked at a bodega and used to sell weed to make some money.

Growing up, Tekashi69 had an interest in heavy metal music. He grew up listening to bands like All That Remains and Parkway Drive. Before coming to rap industry, he was a part of group “ScumGang69”. Other members of the group were ScumBagChad, 6Zilla9 and RighteousP. Starting his musical career in 2015, Tekashi collaborated with rapper Bodega Bamz on track “Shinigami”, “Pimpin”, “Sinaloa” and many more. He was unlike many rappers who used SoundCloud and YouTube for their promotion platforms. Instead he went on his first tour on Europe to promote his music.

In early 2017, Tekashi collaborated with rappers like Trippie Redd and UnoTheActivist on single “Owee”. His recent song “GUMMO” which was released in October 2017 was huge success. So far the song has been streamed over 40 million times on YouTube. It also managed to peak at number 12 on US Billboard Hot 100. On December 23, 2017 he released his next single titled “kooda”. The song debuted at 61 on Billboard Hot 100.

Tekashi69 who is also known as hyper aggressive rapper has “69” tattooed on his body over 200 times. He says that 69 represent his lifestyle and #scumbag which is an acronym for “society can’t understand me”. In support of HIV/AIDS, Tekashi also has HIV tattooed on his back.

He has been involved in several crimes. He went to jail for selling heroin outside a store and then beating up the owner of the store. After that Tekashi again went to jail for selling heroine. After getting out of jail, he focused on his music career. In October 2015, Hernandez pled guilty to three felony counts of use of a child in a sexual performance. According to reports, three videos were uploaded to social sites of a 13 year old girl engaging in sexual activities with two grown men, Tekashi and Taquan Anderson. In his defense, Hernandez stated in an interview saying that he did not rape or have sexual misconduct with her.

Once they were collaborating on single “Poles1469” together but they are no more friends now. Their feud started when Trippie Redd did not want to work with Tekashi69 after rumor arose about Hernandez being a pedophile. Trippie Redd even shared a photo of Hernandez holding hands with another man in an attempt to expose his homosexual behavior. The same month Trippie Redd was assaulted in the hotel in New York over his homophobic comments. Both of them continued to trade insults over Instagram Live for a month.